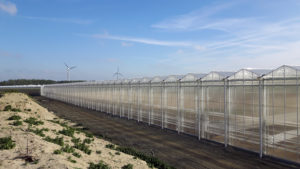 A Greencoat Capital fund has backed the construction of two greenhouses that will draw most of their heating needs from waste heat produced by nearby water treatment facilities.

“A large part of the heat in traditional greenhouses comes from gas boilers and gas CHPs [combined heat and power plants] because for a lot of the year, there is not enough heat from the sun to keep it warm throughout the day,” Samworth said.

“Keeping the temperature exactly right is important to optimize the growing. What this project brought together was renewable heat with the greenhouse.”

Based in Norfolk and Suffolk, west England, Greencoat’s greenhouses will also use a gas-powered combined heat and power plant, which will power the heat pumps that direct waste heat from the water treatment facilities to the greenhouses.

Investors into the Greencoat fund ­­– the name of which the firm declined to reveal at this stage – are “substantially all UK pension funds,” said Samworth, who declined to the reveal return rates of the investment.

“The actual numbers are commercially sensitive but what attracted us to it on behalf of our clients is the returns are relatively predictable and well contracted, with the growers having long-term leases for the assets,” he said.

Greencoat will lease out all 29 hectares created by the greenhouses and will own and operate the heat pumps, backup kit and infrastructure leading to the sewage works. Samworth confirmed that tenants have already been signed up for the entire acreage, with construction expected to complete in fall 2020.

The firm said the greenhouses will provide “ideal growing conditions” for a range of plants and vegetables including tomatoes, cucumbers and peppers.