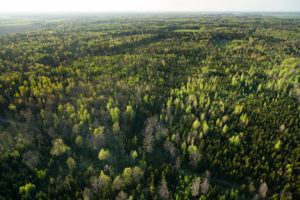 Hancock Natural Resource Group is exploring the possibility of a distinct vehicle for timber and ag investments that prioritizes carbon sequestration over financial returns.

The potential for a vehicle that would take such an “impact-first” approach was included in the inaugural Task Force on Climate-related Financial Disclosures-aligned report, released in late December.

HNRG is the ag and timber-focused subsidiary of Manulife Investment Management.

Manulife sustainability head Brian Kernohan told Agri Investor discussions about any potential vehicle are at a “very exploratory” stage and come at a time of growing prominence for carbon markets.

“We are thinking about whether or not there is a way to offer – if there is an appetite for it among investors – the asset class specifically for the purposes of mitigating climate change,” he explained.

Kernohan assumed his current position overseeing sustainability for all of Manulife’s private investments in September. This comes after an eight-year stint with HNRG that culminated in six years as its chief sustainability officer, according to his LinkedIn profile.

He pointed to the Net-Zero Asset Owners Alliance of institutional investors aiming to remove greenhouse gas emissions from their portfolios by 2050 as just one of many recent indications of demand to allocate capital toward climate change mitigation.

Among the sustainability practices mentioned in the report is a link between 20 percent of annual employee incentive plan compensation and certification of HNRG’s 5.4-million-acre timber portfolio under Sustainable Forestry Initiative standards. Kernohan explained that some form of stewardship performance has been a part of compensation for a portion of HNRG employees for at least the past five years and that the portion subject to the policy had expanded to the entire firm within about the last two years.

A 2019 sustainable investing report stated 101,000 of the 447,000 farmland acres  managed by HNRG had attained third party certification of farming practices and committed the firm to certifying the remainder by the end of this year.

HNRG opted to release its climate disclosure report in compliance with the TCFD framework established in 2017 by the Financial Stability Board, said Kernohan, because it is likely to become the “gold standard” for transparency.

The TCFD’s framework suggests disclosures in four categories: governance; strategy; risk management and metrics; and targets. Specific disclosures include information about oversight of climate-related risks and opportunities governance, resilience of strategy under different climate-related scenarios and identification of metrics used to track progress toward environmental and social goals.

“There does seem to be movement to have firms like ours acknowledge the importance, and have awareness of, climate change and the risks and opportunities it can provide,” Kernohan said.

HNRG’s report identifies carbon removal as the “most beneficial” climate-related opportunity within timber and agriculture. Kernohan said the firm is studying how growing attention to sustainability and carbon should shape management of assets, both in existing vehicles and through potential “impact-first” offerings prioritizing carbon sequestration.

“We do know that you have to manage a forest differently if you want more carbon than if you want two-by-fours. We’re not illuminating whether or not there is a tradeoff in value, it’s that you manage for a different product from the forest,” he said. “That is the second stream we are thinking about.”

HNRG’s report includes reference to climate scenarios in which carbon prices in advanced economies rise to as high as $100 per ton of CO2 by 2030 and further to $140 per ton by 2040. Kernohan declined to discuss how the firm’s interpretation of those projections is informed by its own experience selling 6.1 million metric tons of carbon credits, which is also referenced in the report.

He added that the firm monitors developments throughout related markets closely.

“The question we are asking ourselves, and many others are as well, is: ‘If not just carbon offsets as we know the markets today, what could carbon be used for?’” Kernohan asked. “That’s where there is an interesting question mark around the investment of forest and farmland.”