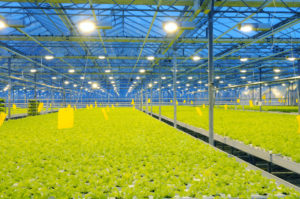 As consumer preferences shift and traditional farmers encounter new challenges, controlled environment agriculture promises to mitigate a variety of risks impacting both the demand and supply sides of the US’s produce markets.

While data from Nielsen shows greenhouse-grown produce only accounted for 2.3 percent of all produce sold in US grocery stores in the 12-month period to September 2018, its increasing popularity suggests it will play a central role in the future of US food production as its market share increases.

Further data released by Nielsen in 2018 shows food and beverage e-commerce sales have passed the “20 percent tipping point” and could reach a mature state (70 percent of consumers purchasing food and beverage goods online) in less than seven years.

As such, retailer profitability, and indeed survival, is increasingly dependent on produce quality, safety and availability, which are now the key criteria for consumer selection of a grocery store or chain.

Unfortunately for bricks-and-mortar grocers, the ability of traditional open-field agriculture to provide that supply is being compromised by changing climates and labor shortages.

The central valley of California, for example, supplies around 90 percent of the country’s lettuce. Between 2012-2017, California experienced a drought so severe that governor Jerry Brown was forced to declare a state of emergency. Subsequent heavy rainfall had a detrimental impact on production, resulting in high prices and food shortages in eastern states between January-April 2017.

Meanwhile, California’s ongoing farm labor shortage has exacerbated the situation. More than half (56 per cent) of respondents to a California Farm Bureau survey, the results from which were released in April 2019, said they had been unable to hire all the employees they needed at some point in the last five years. This is despite wages being at record highs – 86 percent of respondents to the Bureau’s survey said they had raised wages to attract labor.

Furthermore, many varieties of produce demanded by customers can only be effectively grown in a controlled environment. Thirty years ago, the USDA formally recognized only one type of tomato. Now, there are dozens of listed varieties. Given the sugar content of many of them (and resulting insect pressure) these varieties simply cannot be economically produced in a field environment.

Confronted with these challenges, and several more besides, farmers and retailers alike are looking at CEA greenhouses to overcome supply and food safety issues, as well as wider market pressures.

Greenhouses give farmers unparalleled control over the temperature, humidity, nutrient and CO2 levels through which quality and yields can be maximized.

Additionally, these controlled environment production conditions enable farmers to significantly automate both production and harvesting. Climate control and automation also translates into enhanced yields – up to a tenfold increase per acre for vine crops such as tomatoes and more than twentyfold increases for lettuce and other leafy greens.

The transformation of key components in the US food system through CEA is likely to be a multi-billion-dollar investment opportunity over the next decade. However, raising the necessary funding for this expansion will require an infusion of institutional capital.

The characteristics of CEA enable the de-risking of agriculture through the application of project finance techniques. If done properly, this de-risking fundamentally changes the risk profile of traditional field agriculture, enabling the sourcing of the capital required at an acceptable cost.

Project finance principles mandate attention to three areas of risk: offtake, construction and operations. It is difficult to predict yields with any certainty in traditional agriculture, and thus impossible to commit to offtake levels and a long-term offtake agreement.

CEA enables predictability of yields as traditional sources of yield uncertainty (such as the climate and pests) can either be eliminated or controlled. This enables long-term contracting through produce purchase agreements for firm volumes with pricing visibility.

Construction is typically de-risked in infrastructure development through engineering, procurement and construction contracts. These agreements pass single point responsibility to the contractor to deliver a completed project (including all interior systems) on time and within budget.

Failure to deliver on time and within budget will result in liquidated damages being payable. This experience is directly applicable to controlled environment greenhouse facilities.

Finally, operating risk can be addressed through operating leases with experienced operators. Such leases should incorporate required operating metrics to ensure yields that will enable the facility to achieve agreed offtake levels.

Indoor agriculture holds immense promise both as a solution to farming challenges and as an investment vehicle. By applying proven project finance techniques to key crop categories grown in a controlled environment, the capital requirements necessary for radical transformation can be secured.

Rusty Brewer is a partner at Amis, Patel & Brewer.