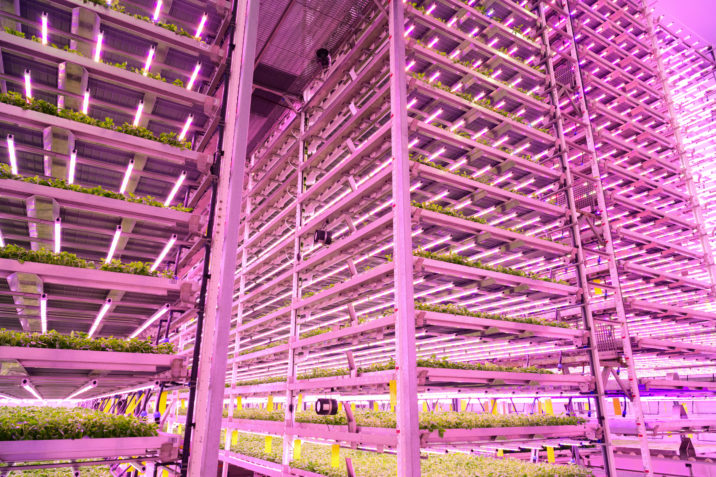 High-tech CEA farmers utilize a variety of systems ranging from simple shade structures and greenhouses, to vertical farms where lighting, water, heat and ventilation are fully automated and monitored alongside plant health and real-time needs.

“What’s interesting is the way CEA intersects with other movements in technology, but also climate,” says Salvatore Lavallo, head of foreign direct investment at the Abu Dhabi Investment Office, the government hub enabling investment opportunities in the emirate.

Country-to-country, rates of CEA adoption vary with differences in climate, diets and investment, but Europe currently leads in terms of market revenue. However, there’s been a rising interest in CEA in Asia-Pacific and the Middle East, where population booms and challenging environments have created strong incentives for its success. Currently, China controls the largest share (28 percent) of Asia’s $16 billon CEA market, followed by India (13 percent) and Singapore (12 percent).

In the Middle East, arid desert climates and limited rainfall make farming extremely difficult, which has primed countries such as Kuwait and the UAE to pursue CEA as a way to circumvent their country’s natural limitations. For its evangelists, CEA poses a potentially viable answer to some of the biggest challenges facing the world today, such as climate change, food insecurity and supply chain instability.

“What CEA brings to communities across the globe is untrumped supply, right in the heart of demand,” says Benjamin Swan, founder and CEO of agtech venture fund BECO Capital and co-founder and former CEO of Singapore-based vertical farming company Sustenir Agriculture.

“It brings safety back to householders, because consumers know exactly where their products are coming from and how they were grown. It also brings taste back to the plate because products are harvested when they’re ripe, not to endure logistics.”

The rising threat of food insecurity

Over the past half-decade, the issue of food security has become harder to ignore, especially as the effects of climate change have intensified. There have been a growing number of reports of staple crops being devastated by climate-related natural disasters such as floods and prolonged heatwaves, as well as shortages of water and erosion of topsoil. In key agricultural zones such as Brazil and Argentina, droughts are likely to reduce soybean yields, while corn production is projected to decline by 24 percent as early as 2030.

In India, researchers estimate that climate change could wipe out as much as a quarter of wheat yields by 2080 – leading to government sanctions on exports – while Malaysian paddy farmers expect dramatically smaller harvests as heavier-than-usual rainfall flood their fields and kill seedlings.

The paradox of agriculture’s climate change problem is that modern farming is one of the biggest contributors to global emissions, due to intensive farming practices, unsustainable livestock farming, as well as the complex logistics needed to transport perishable foods to consumers. As populations become increasingly urbanized, these networks will only expand to accommodate demand, says Swan, leading to bigger carbon footprints and food waste. In Southeast Asia alone, urban populations are expected to balloon to more than 150 million people, while concentrated in a handful of large urban areas.

“By 2050, more than 7 billion people will live in urban areas [globally],” says Erez Galonska, co-founder and CEO of vertical farm distributor Infarm. “The current food system cannot meet the needs of the growing urban populations – there is great need for more diverse and efficient food production.”

The Asia-Pacific region is one of Infarm’s focus areas for global expansion. Galonska attributes this to the expectation that the vertical farming market size in the region is expected to grow significantly, the growing population as well as the “demand for fresh and pesticide-free food.”

Climate-related challenges have been further compounded by continued supply chain disruptions, owing first to the pandemic-induced lockdowns and now geopolitical conflicts such as the Russia-Ukraine war, which has led to a surge in commodity prices, priming the world for a global food crisis.

While CEA didn’t emerge because of food insecurity, it has quickly become a popular strategy used by both governments and industry to solve food production woes. In China, for example, scientists are experimenting with salt-tolerant rice strains to counter the threat of rising sea-levels.

While ‘seawater rice’ sounds straight out of a science fiction novel, many more are turning to CEA farming for more efficient and sustainable production. Singapore’s government, for example, has pledged to produce 30 percent of its food locally by 2030 by funding CEA projects like aquaculture systems and vertical farms, while Japan is home to one of the largest indoor farms in the world.

Local CEA movements – funded in part by government – in Kuwait and the UAE have given birth to a landscape pockmarked by hundreds of vertical farms, lo-tech greenhouses, and smart indoor systems. ADIO embarked on a $272 million investment and incentives program in 2019 to create an agtech ecosystem, which has since deployed more than $140 million in two installments, a large part of which has targeted indoor farming.

For Lavallo, by enabling a total reimagining of ‘inefficient’ traditional agriculture, CEA could help reduce dependence on scarce resources through technological innovation. This might mean replacing conventional and increasingly scarce inputs such as soil and water with innovations like nutrient-rich hydroponics.

Farmers could mitigate rising labor costs by shifting to smart greenhouses equipped with automated irrigation and fertilization systems. Even the concept of ‘farmland’ is being challenged as urban landscapes – think rooftops, parking garages, or even grocery stores – become cultivatable area, which could be key for land-scarce countries like Singapore and Hong Kong, says Swan.

CEA comprises a variety of different approaches, each with their own particular purposes. Take vertical farms, for example, which utilize stackable layers to produce more food per area. Vertical farmers have been known to use the surfaces of buildings, or freestanding towers and walls that are housed within enclosed environments where temperatures, light and humidity are controlled.

Due to the nature of vertical farms, they’re somewhat limited in terms of what can be grown through this technique. According to Eleanor Choong, COO of Sunway XFarms in Malaysia, “Leafy greens [such as salad lettuces, Asian greens, kale, herbs] adapt well to vertical farming due to their weight and hardiness,” leading even many traditional farmers to turn to hydroponics to grow certain produce.

According to Galonska, vertical farms in closed environments could even lead to increased diversity in fresh produce and reduce a reliance on monocultures – industrial agriculture depends on the large-scale production of monoculture plants that need to travel long distances to reach customers.

Currently, monocultures are selected based on how much they can yield and travel while remaining shelf-stable, however, they’re susceptible to pathogens and are nutritionally-weaker. ADIO-affiliated AeroFarms, for example, is exploring potential new cultivars to introduce more diversity into the market.

Lavallo says that CEA allows farmers to venture into other foods such as berries and mushrooms – produce that would otherwise be impossible to grow in the arid Middle East. Depending on the desired outcome, CEA could also enable the production of more diverse crop yield due to the flexible nature of adjustable nutrient flows and piping.

Despite its rosy outlooks, there are significant hurdles that will limit its growth in the short term, the first being the significant costs associated with setting up and operating CEA farms. On the whole, agriculture can be a highly unprofitable industry for many, with private producers frequently relying on government subsidies to remain sustainable.

However, CEA offers additional challenges because it incurs higher capital expenditures than traditional farming due to intensive utilities use, and expensive research and development, says Sunway XFarms’ Choong.

According to Isabelle Decitre, founder and CEO of foodtech venture fund ID Capital, costs are also difficult to estimate due to variations in each market such as surrounding climate and the availability of technology. Operating a vertical farm in Kuwait, for example, might incur higher electricity costs than in the Netherlands due to the need for more air-conditioning.

Decitre adds that most CEA projects that fail tend to do so because their operators are unable to truly ascertain the actual market demand for indoor-farmed produce, despite rising demand for organic and healthy foods. In many cases, the high costs of CEA farming push vertical and indoor farms to stick with high-value crops – such as tomatoes, eggplants and microgreens – that can offset their costs. However, doing so limits access to these foods by lower income demographics, thus defeating CEA’s goal to ensure supply to as many consumers as possible.

Investment in CEA is growing, however, and Decitre notes that its perception as a “speculative” technology area in Asia has exerted some downward pressure on venture capital interest. That said, she does see optimism for the future of CEA, given the spate of technological improvements that have taken place in smart greenhouses.

According to Choong, profitability could come with time, given enough careful planning, though more concerted effort is needed among policymakers, educational institutions and consumers to push CEA adoption toward sustainability.

However, she emphasizes that CEA is not a panacea to all food security issues; rather, it is one tool that goes in hand with other farming practices such as permacultures, forest farming and others.

According to ADIO’s Lavallo, there will always be some level of food insecurity where there is a large population. “And because indoor and vertical farms have different applications, you’re going to have different needs being met.”

At the end of the day, technology is catalyzing and transforming production, but the objective remains the same – to grow enough food to feed everyone. “Traditionally, we’ve always believed agriculture requires soil, rain and sunlight, but in reality, what crops require is nutrition, water and light,” says Lavallo. “The moment we realize that, the possibilities are endless.”