Blue Sky Alternative Investments has purchased a significant tranche of Murrumbidgee general security water entitlements worth about A$40 million ($29.8 million; €25.4 million) from the Harvard Endowment Company.

The asset manager purchased four parcels, including three of 6,714 megaliters and one of an undisclosed smaller size. The parcels will be split across three different portfolios, including Blue Sky’s Water Fund and its direct investment mandates that are deployed into water.

Blue Sky’s interim managing director Kim Morison confirmed the purchases to Agri Investor and said the transaction was “business as usual” for the firm.

The deal comes at a trying time for Blue Sky, which has come under scrutiny following a short-selling attack by US hedge fund Glaucus in March which sent its share price tumbling and claimed the scalps of board members including chief executive Rob Shand.

Morison indicated that Blue Sky decided to purchased the entitlements because they would dovetail with the firm’s other interests.

“Our ag fund manages a property down that way, so some of the water is earmarked for that. And we’ve got other clients down there who want to lease some of the water,” he said. “We’ll continue to look at other opportunities, too.”

Morison said the transaction was “larger than usual” for Blue Sky but dismissed concerns that the firm’s trades could distort the market on their own, describing its water portfolio as “still pretty small” in relative terms when compared with the market as a whole.

Blue Sky also addressed these concerns in an update to the ASX issued last week, in which it said its water fund’s entitlement holdings stood at A$258 million as at May 31, 2018. This includes A$194 million of “sophisticated investor capital” and A$64 million of institutional capital, representing more than 500 individual investors.

Across all its portfolios, Blue Sky manages water entitlements deployed in 29 separate trading regions with a combined market value of A$500 million. With approximately A$23 billion of water entitlements on issue in these regions, Blue Sky’s total deployment since the water fund’s inception in August 2012 represents 2.2 percent of the total value, the company said.

The water fund temporarily closed to new investors in November 2017 due to significant unfulfilled demand from existing institutional investors to progressively deploy capital, as well as to fund redemptions, and this remains the case.

We recently interviewed Kim Morison to understand how Blue Sky’s LPs are reacting to troubles at the firm. Watch the video here 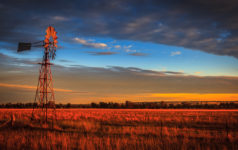