A couple of decades ago, the EU realized Ireland would soon run out of trees – the country had Europe’s lowest cover rate. So, the bloc supported a vast planting program, incentivizing farmers to host new forests through both grants (to fund the capital expense) and “premium payments” (to compensate for the opportunity cost of waiting for the trees to mature).

Both sets of financial support are now approaching their expiry date, and farmers are no longer so interested, at least in a commercial sense, in taking care of forests. Fund managers are smelling an opportunity – not least SLM Partners, which is nearing a final close on its debut Irish timber vehicle, as we reported last week.

The sector is ripe for the consolidation GPs frequently like to offer. Farmers are keen to sell their timber assets, but these are often small, fragmented and vaguely described. SLM hopes to aggregate up to €60 million worth of forests into a coherent portfolio that institutional investors would be keener to buy. But the firm thinks there will be another reason for the likes of pension funds to be attracted to the package: its distinctive approach to managing the forests, which it dubs “continuous cover.”

Conventional, or “clear-fell” forestry, consists of planting all trees at about the same time and harvesting the whole lot after 30 to 40 years. It faces several problems. First, it is often criticized by environmentalists, who believe it damages soil, causes water to run off and reduces biodiversity (among other drawbacks). The method is banned altogether in several countries, including Switzerland, Slovenia and many German states. But it also has downsides from a pure investment standpoint: all your cash comes back at the end of the process, and the next harvest cannot happen for several decades.

That’s not ideal for pensions and insurers, which have liabilities to match at shorter intervals. That’s where “continuous-cover” forestry (CCF) comes in. Under that approach, forests are of uneven age, and select groups of trees are harvested only when they are mature. As such, forest cover is permanent, income is generated every few years and the capital value of the forest is preserved, SLM says. “It’s ideally suited to long-term ownership,” investment director Darius Sarshar told us last week.

It has other advantages. CCF brings forward cashflows, thanks to heavier thinning in the early years. It also makes the asset less vulnerable to potential outbreaks of diseases and pests, SLM argues, and insulates it better from fluctuations in timber prices – “much like ‘clipping the coupon’ on a bond.” A model the firm tested two years ago on semi-mature Irish forestland credited CCF with being able to produce net IRRs of 6 percent, compared with 5.5 percent for clear-fell management.

There are caveats. First, CCF can’t be applied everywhere. “The continuous-cover approach, or selection harvesting, is suitable where the tree species are shade tolerant (i.e. they can regenerate under the shade of other trees),” David Brand, chief executive of New Forests, told us this week. CCF is commonly used to manage eastern hardwoods in the US and Canada, interior softwood forests in Western North America, tropical natural forests and some temperate hardwood forests. Alternative approaches are preferable when tree species are less tolerant to shade; it is also the case on very wet sites, where late thinning can make trees vulnerable to windthrow.

However, Sarshar observed that Sitka spruce, the predominant commercial conifer species in Ireland, is light-demanding and yet doing very well in CCF stands. “Thinning intensity is higher than under conventional management, generating higher recurring cash yield and opening up the canopy more to allow in more light. The species is fast growing and regenerates naturally, responding well to this management approach.”

In some situations, other types of sustainable forestry may be more suitable than CCF. Commercial reforestation on degraded lands, using fast-growing species, can produce wood fibre and store carbon in the landscape while lessening pressure on natural forests, says New Forest associate director MaryKate Bullen. Agro-forestry models, which we covered more extensively earlier this year, can help address food security concerns and provide additional income in the early years.

Finally, converting conventional forests to continuous-cover is possible – but it must be done early and requires attention. “CCF is an adaptive system, rather than prescriptive, based on close monitoring of forest development,” says SLM. To help smooth matters, the assets of the firm’s Irish fund will be managed by Purser Tarleton Russell, its local partner.

CCF holds plenty of promise – but GPs embracing it had better be fully covered. 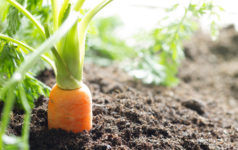