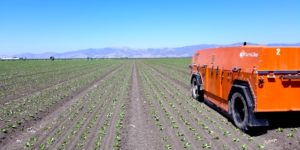 “There’s been an interest in farming more recently, but you’ve seen a lot of those dollars flow into places like autonomous vehicles,” said Schoettler, who has been an investor in robotics since 2011. “Especially as it relates to special purpose vehicles, [agriculture is] not a place where people who are pushing the envelope in robotics ever really spent a bunch of time.”

“You’re starting to see ag embrace technology and automation in a way it really didn’t in prior decades,” Schoettler added. “It costs a lot less to develop and build these things than it did decades ago, so the time is right.”

Developing specially built machinery comes with the risk that it could fail to capture market share with farmers, explained Schoettler, who added that Calibrate’s support for FarmWise falls within an investment theme focused on labor shortages and rising labor costs.

Wilbur-Ellis, Xplorer Capital and Alumni Ventures Group all joined in the Series A for San Francisco-headquartered FarmWise, which offers autonomous weeding robots that use machine learning, computer vision and precision mechanical tools.

The Series A capital will support additions to FarmWise’s robotic engineering and operation teams and further research and development of capabilities, which currently focus exclusively on weeding.

Schoettler declined to identify specific farming tasks FarmWise intends to add to its robots, but did mention sensors to gather soil quality data and targeted application of fungicides or insecticides as areas he could envision working with the company’s platform.

“Our robots will increasingly act as specialized doctors for crops, monitoring individual health and adjusting targeted interventions according to a crop’s individual needs,” said FarmWise co-founder and chief executive Sébastien Boyer in a statement.

FarmWise currently derives revenue from trials that see most growers pay local prevailing market fees for weeding services, and a smaller group of customers with larger operations who lease robots directly, according to Schoettler.

“Over time, we would see whether that evolves or if there is another model that comes to bear as well,” Schoettler added, who declined to discuss pricing for FarmWise’s products and services in more detail.

FarmWise also declined to disclose whether the company pays farmers for data collected during trials.