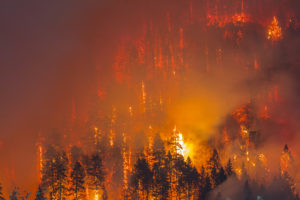 Weyerhaeuser has entered into two agreements with Hancock Natural Resource Group, selling 149,000 acres of southern Oregon timberland in one transaction and acquiring 85,000 acres in mid-coastal Oregon in another. The net cost is $40 million.

The deals were agreed before the spread of wildfires in the region that had consumed almost one million acres within Oregon by September 11.

Both firms declined to comment on whether either specific property was impacted.

Weyerhaeuser – a Seattle, Washington-headquartered timberland REIT listed on the New York Stock Exchange – acknowledged in a regulatory filing Friday that fires had reached some of its Oregon properties. According to the filing, it was still too early to estimate potential business impact. Weyerhaeuser chief executive Devin Stockfish will provide an update at a September 14 investor conference.

Jack Lutz, an economist at timber consultancy the Forest Research Group, told Agri Investor he was aware of at least one institutional timberland property in Oregon, which he declined to identify, that sustained fire damage last week.

Early reports, he said, indicate wildfire damage appeared worse in Washington than in Oregon, where most fires have been to the west of the Cascade mountain range and inland from the coast. Timberland located along Oregon’s western coast, Lutz explained, is usually planted in Douglas fir and hemlock varieties, which tend to be higher value than the pine species prevalent in the drier eastern and southern regions of the state.

Though it is too soon to know definitively, Lutz said officials’ references to “brush fires” and the fact fires have been more prevalent inland from the coast, suggests much of the land that has burned is more likely to be managed by the Federal Government than private investors.

“There [are] going to be some private companies, sawmill companies, that may have land in that area, but most institutional land is on the west side [of the Cascade mountain range], where the fires aren’t,” said Lutz.

In a statement this month, Stockfish described the asset acquired from Hancock as being land contiguous with existing Weyerhaeuser properties, which is well-positioned for both domestic and export markets.

Both firms declined to comment on the deal, which is expected to close in the fourth quarter.

Given the differences in their business models, it is impossible to know the role internal considerations for either Hancock or Weyerhaeuser helped motivate the deal, Lutz said.

Whereas Weyerhaeuser’s scale and existing land and sawmill resources in the region suggest its acquisition is likely motivated by potential operational efficiencies, Hancock could also be managing the coastal timberland for investor clients with other reasons to sell.

“For Weyerhaeuser, it could be a nice swap and for Hancock, it could be almost like two separate transactions that happen to occur at the same time,” he said.

In a June research report, Hancock analysts noted certain forest product markets had been negatively impacted by trade disputes between the US and China beginning in 2018.

Lutz said Chinese tariffs on logs and lumber are among factors that have weighed on recent valuations in the export-focused US North-West, where timberland values have depreciated by 7.1 percent over the past year, according to the Q2 NCREIF index.

“I know of one investor that just devalued their West Coast properties and they think it is primarily because they changed appraisers and the new appraiser had a more negative outlook on what was going to happen over the next couple of years than their prior appraiser,” he added.