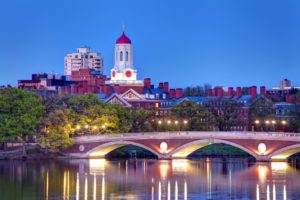 Harvard Management Company made progress in its mission to increase its exposure to private equity and venture capital, according to an annual report from chief executive officer NP “Narv” Narvekar.

While the relative size of the private equity portfolio grew over the past year, the performance slightly declined, coming in at 11.6 percent versus 16 percent for FY19. That could indicate commitments to new funds that are still early in their life. Narvekar mentioned this possibility last year. “Many peers dealt with these growing pains years, if not decades ago,” he wrote in the 2019 report.

Harvard’s overall return as of June 30 was 7.3 percent, an improvement over 6.5 percent the year before.

Narvekar took over at Harvard in December 2016, and instituted a five-year plan to revamp the endowment. That involved raising its private equity allocations and unloading other illiquid assets weighing on the portfolio.

“These legacy assets do not have a prospect of generating a return commensurate with the risk and illiquidity they entail and, in some cases, may not provide a return at all,” Narvekar wrote this year.

Notably, Harvard also spun out its natural resources team into a new firm called Solum Partners and sold half of a “collection of agricultural assets” to another investor, which Solum will manage with Harvard and the other investor serving as LPs.

This is the second internal team Harvard has spun out, after sending its real estate team to Bain Capital, as Buyouts reported.

“After three full fiscal years of hard work, we are beginning to see the benefits of the ongoing transition,” Narvekar wrote. “To be sure, there is much left for us to accomplish, but the early signs are encouraging and we remain confident in the direction we are headed.”