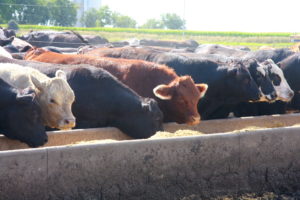 AGR chief executive Ejnar Knudsen told Agri Investor the firm had been working with Frank Mitloehner, a professor in the Animal Health Department at UC Davis, to understand the current and future environment around animal welfare, climate regulation and best practices. A source told Agri Investor the Nuveen-affiliate’s drew from its second fund to finance its part in the $80 million deal.

AGR managing director Daniel Masters told Agri Investor Mitloehner is helping AGR to improve cattle welfare and minimize the beef carbon footprint at GPCC, where the firm is in the early stages of a comprehensive carbon-mapping project. Such steps, Knudsen said, are a key focus following the acquisition, which came after an initial $77 million deal for a 50 percent stake in GPCC by AGR and StepStone in September 2019.

Knudsen said that although the introduction of plant-based alternatives and perceived sustainability issues have helped slow growth rates for animal protein to 1 or 2 percent, the cattle, land and infrastructure that come with feeding operations are exactly the type of essential real assets that offer the uncorrelated current yield AGR is looking for.

“If you overlay that, like we did in our egg investment, with higher animal welfare and sustainability standards, you can get products that are more positioned to be in higher demand and have higher growth within the sector,” said Knudsen, referencing AGR’s investment into Opal Foods, an egg producer the firm recently sold its stake in to a consortium that included Proterra Investment Partners.

He noted that just as the invention of vegetable-based oils did not eliminate animal-based oils and organic production has not eliminated conventional ag, strengthening sustainability of both plant and animal proteins will be necessary to meet future demand.

“There are companies we are interested in that will be delivering a lower carbon food product. Some will be carbon-zero and others will be 50 percent plus reduced,” he said. “There is going to be more and more food products that are carbon – not even just carbon neutral – but some are even going to be carbon negative.”

GPCC’s parent Green Plains is a Nasdaq-traded ethanol producer that acquired two feedlots from Cargill for $37 million in 2017. In its statement announcing the sale, Green Plains highlighted that the deal would allow it to focus resources on its high protein ingredient operation.

GPCC aggregates family-owned, grass-fed cattle that it channels through feed yards to optimize the process of growing a cow from around 700 pounds to about 1,200 pounds before being sent to packers. The company’s 335,000 head feedlot capacity is spread across six sites in Colorado, Kansas and Texas and ranks as the fourth largest in the US.

Masters highlighted that the investment drew upon AGR’s established focus on carve-outs and that GPCC had been designed to mitigate commodity and currency risk within a wider ethanol business, giving it characteristics that made the company more attractive.

“It’s really a company that is built for the risk averse,” he said. “It has a very unique risk-management overlay, which enables the business to get paid for just adding protein. We don’t take price risk, which most other beef operations do.”

Davis, California headquartered AGR is an agribusiness-focused firm founded in 2012 that is currently seeking between $200 million and $300 million for its third fund.