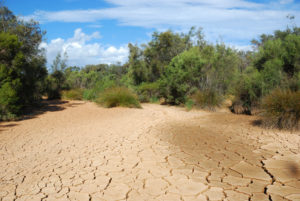 She told world leaders: “You have stolen my dreams and my childhood with your empty words … You are not mature enough to tell it like it is. You are failing us.”

You may not fully agree with Thunberg’s critique, but it’s hard to deny the increasingly visible impact she is having on a generation of young people, as the huge turnout at last week’s climate strikes in Australia and other countries demonstrate.

How does this relate to agriculture investment? Well, as we’ve said here many times before, agriculture is on the front line of climate change, and Australian ag in particular, with its potential for long droughts like we are seeing now and other weather extremes, is an especially visible member of that front line.

Which makes the response from Australian politicians to the Australian Farm Institute’s recent report on climate change, supported by the Farmers for Climate Action lobby group, all the more disappointing.

The environment minister Sussan Ley unveiled the report at Parliament, which was heartening to see – but no National Party MPs turned up to the launch, despite apparently being invited. This is particularly disappointing when you consider the Nationals’ purported role as champions of rural Australia and, by extension, the agricultural sector.

As the AFI itself said supporting the report’s publication: “This report does not seek to set out an adaptation plan for the sector, nor is it a comprehensive review of existing plans and strategies. Rather, it interrogates the need for a national strategy on climate change and agriculture and offers direction for the industry’s next steps on this issue within relevant local and global frameworks.”

It’s clear that there is no real national strategy on climate change in Australia at the moment, amply demonstrated by prime minister Scott Morrison’s non-attendance of the aforementioned UN climate summit.

Investors, whether they are involved in livestock, cropping, horticulture or even water, will be well aware of the risks, though, and devising their own strategies to deal with the changes we are already seeing.

A paper published this week by the Clean Energy Finance Corporation in partnership with the National Farmers Federation, outlined some simple steps that farmers could take to lower their energy bills and consequently reduce their carbon emissions.

The steps range from very small and relatively cost-effective measures to much more capital-intensive actions, which are more likely to be relevant to large corporate farmers and those backed by significant sums of capital. There is the potential for CEFC finance to help here as well.

This is where private investors in agriculture have a big role to play. Not only can they step up and make positive changes in the absence of federal government policy that actively helps them – but it will also be a necessary change to protect investor returns as climate change continues to bite.

And it will have the happy bonus of helping to cement agriculture’s position as a positive ESG investment for institutions as well.