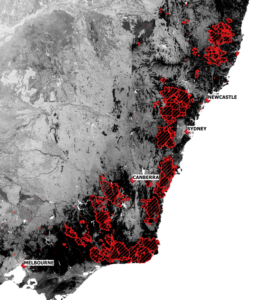 The amount of agricultural land burned by the unprecedented Australian bushfire season is much higher than previously estimated in January, updated data shared with Agri Investor shows.

New figures from Digital Agriculture Services, an agtech start-up that has developed detailed maps to allow automated valuations of farmland in Australia, shows that up to 2,458,334 ha of agricultural land was affected by the fires.

This represents 29 percent of the total area affected of 8,604,021 ha, covering all types of land.

DAS’s previous estimate in January this year found that 820,385 ha had burned, or 14 percent of the total land area affected.

The significant jump in affected land is a result of Victoria providing DAS with more detailed fire boundary maps showing a larger area of land had been affected, as well as completely new maps for the Australian Capital Territory and Queensland, to which DAS did not have access in January.

DAS also noted that the data for New South Wales, which shows that 558,878 ha of agricultural land was hit by fire, was only correct as of January 15, 2020. This is due to the state’s definition of marking fire boundaries while they are still alight, whereas the data for other states relates to areas where fire has already burned. As a result, DAS said the NSW figure could be an underestimate.

There were no noteworthy changes to the fire boundaries in South Australia and Tasmania, while Western Australian and the Northern Territory have not publicly released fire boundary data and do not intend to do so.

Queensland is now recorded by DAS as the hardest-hit state in agricultural terms, with 1,633,130 ha burned, or 66 percent of the total agricultural land affected.

NSW and Victoria, though, saw much higher impacts than any other state on their forestry and plantation assets. Victoria saw 874,327 ha of forestry affected, while NSW had 749,410 ha impacted.

The damage to NSW forestry assets was so significant that the state government was last month forced to cancel plans to privatize state-owned softwood plantations that are managed by the Forestry Corporation of NSW.

DAS generated its data by overlaying fire boundary maps developed by Emergency Management Spacial Information Network Australia (EMSINA) – with the assistance of Geoscience Australia staff – onto land use maps developed by the Australian Bureau of Agricultural and Resource Economics and Sciences. EMSINA is a group of practitioners who use spatial information technologies to support decision-making in the emergency management sector.