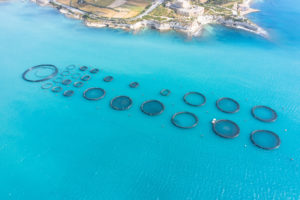 The group of investors coordinated by Blue Oceans led nextProtein’s $10.2 million series A fundraising and provided a “significant share of the total sum.”

“We believe insects tech is at a stage where it can scale,” said Lim. “Insects as fish feed has already been validated from a technical standpoint.

French start-up nextProtein raises black soldier fly larvae to be used as animal feed. It will initially target the aquaculture sector, with plans to produce feed for poultry, hogs and pets.

The company will use the series A funds to build a second facility – its current operation is based in Tunisia’s Cap Bon region – and plans expand its team. It has targeted increasing annual production to 100,000 tonnes by 2025. It estimates this will give nextProtein a 10 percent share of the global insect protein market.

Lim said Blue Oceans is looking at a variety of solutions to achieve its goal of creating healthier oceans by reducing overfishing and plastic pollution.

The firm aims to tackle overfishing by investing in sustainable fisheries. This will involve innovations such as those that reduce bycatch; ocean management solutions, such as drone, satellite and artificial intelligence; and sustainable aquaculture, which in turn is broken down into solutions to counter aquaculture pollution and promote sustainable feeds.

“In each of these, we’ll have to look at a portfolio of solutions,” explained Lim. “With feed, we think insects could substantially help from a protein perspective but other solutions are still needed to address the problem from an oil perspective as well. On aquaculture pollution, one of the emerging solutions is precision aquaculture, which results from combining multiple innovations such as smart sensors and big data.”

Blue Oceans currently works on a deal-by-deal basis with a network of investors including family offices, wealthy individuals and funds of funds.

At present, the firm does not have specific allocated capital from which it draws, though Lim confirmed that this could change.