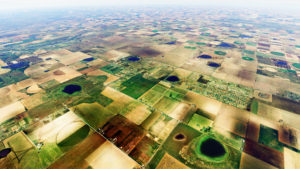 Malloy was responding to a question about where crowdfunders currently fit into the established LP-GP nexus and the role they could play in the future. For those seeking to democratize access to farmland through this approach, they will be keenly aware that traditional fund opportunities presented by the likes of Westchester and Paine Schwartz play a big role in defining the type of access the largest LPs have to farmland.

AcreTrader’s CEO declined to disclose exactly how the firm has so far worked with pension funds and endowments, for example, but he did reveal that the start-up has looked at deals worth hundreds of millions of dollars and expects to be active “across the spectrum of size.”

For a firm that has predominantly dealt in transactions worth between $1 million to $5 million since it was founded in 2018, you would have to assume capital for deals worth hundreds of millions of dollars would be supported, at least in part, by large institutional players.

Another start-up in the crowdfunding space is FarmTogether, a company launched in 2017 which has a longstanding managed account facility – referred to as a sole ownership offering on its website – and which completed a publicly disclosed $22 million organic apple deal in Washington on March 11.

The investment has a net IRR target of 15 percent, a net average cash yield target of 19.6 percent and will be operated by Stemilt Growers, one of the largest growers and marketers of apples in the US, established in 1964. The deal was attractive to Stemilt because it “was a cheaper use of capital than buying the land themselves and developing it,” FarmTogether founder and CEO Artem Milinchick told Agri Investor.

The start-up has been “blown away” by the eagerness of pension funds, endowments and foundations to discuss its approach, track record and ways in which they can work together, said Milinchuk.

Having closed its first deal in Q3 2019, the company is a few years away from hitting the three-to-five-year track record that these LPs would like to see. The start-up believes it has already developed and can act on a differentiated approach to sourcing farmland, which is the second-biggest hurdle it must clear “before they commit hundreds of millions” following a successful trial period, added Milinchuk.

“[Due to farmland’s fragmented nature] we are building the tech that will allow us to source, underwrite and manage hundreds of thousands of farms that are below the $10 million range, because that’s where most of the market is,” said the CEO. “If we can show that to institutions, then they will give us a shot. We don’t necessarily have to have the same five-to-10-year track record because it’s such a differentiated approach.”

FarmTogether’s analysis of the US farmland market, which considers factors such as historic yields, returns, water access and long-term climate impact, values the size of the prize in this $1 million to $10 million segment at $1.1 trillion, or 400 million acres, said Milinchuk.

Given that the majority of US farmland crowdfunders were established between 2015 and 2018 (bar Farmland LP, which was founded in 2009), it will be a few years yet before their ability to compete for big ticket institutional commitments becomes clear.

For those that can win the trust and confidence of these LPs, the longstanding investment bottleneck caused by the fact that only a limited pool of GPs are able to demonstrate a track record in the asset class could play to their advantage.