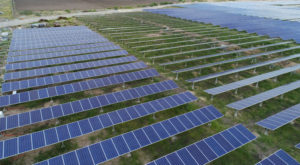 An additional 10GW of agrivoltaic system capacity will be added to global farmlands by 2030, predicts a report from Fitch Solutions Country Risk & Industry Research, a separate arm of the company which produces the Fitch Ratings data.

Unlike the co-location of photovoltaic solar panels and agriculture which has been done for decades, agrivoltaic involves the dual use of land for solar panels on elevated seven to ten-feet structures, with livestock grazing or crops growing underneath them.

Higher upfront costs, non-standard project designs and the need to change farming logistics have historically limited their use and capped the global installed capacity at 2,900MW, according to Fitch Solutions.

“That said, demand is increasing for the installation of agrivoltaic systems as more studies have begun to show their advantages and governments realise the benefits. As such, we expect installations for agrivoltaic systems to take off globally over the next few years, with total installed capacity jumping above 10GW over the coming decade,” the report said.

Among the advantages Fitch Solutions highlights include dual revenue streams from the same plot of land, as well as the fact agrivoltaic systems can provide alternatives for land that has use constraints.

The report also cites a 2019 US National Renewable Energy Laboratory study, which showed crops such as tomatoes can improve their water-use efficiency by up to 65 percent due to the increased shade, while a plant-based understory can reduce temperatures by as much as 9 degrees, improving performance of solar panels.

Government policy and M&A activity, such as the Italian government’s decision in April 2021 to allocate €1.1 billion from its €6 billion National Resilience and Recovery Plan to agrivoltaic, is another development which supports growth projects, according to the report.

“In March 2021, German renewables company BayWa r.e completed a 1.2MW agrivoltaic project in the Netherlands, with the company set to bring online 35MW of agrivoltaic capacity in Europe by year-end 2022,” the report said.

“In total, there are more than 2,500MW worth of agrivoltaic projects in the planning or construction stages across Europe, Asia, Australia and the US.”