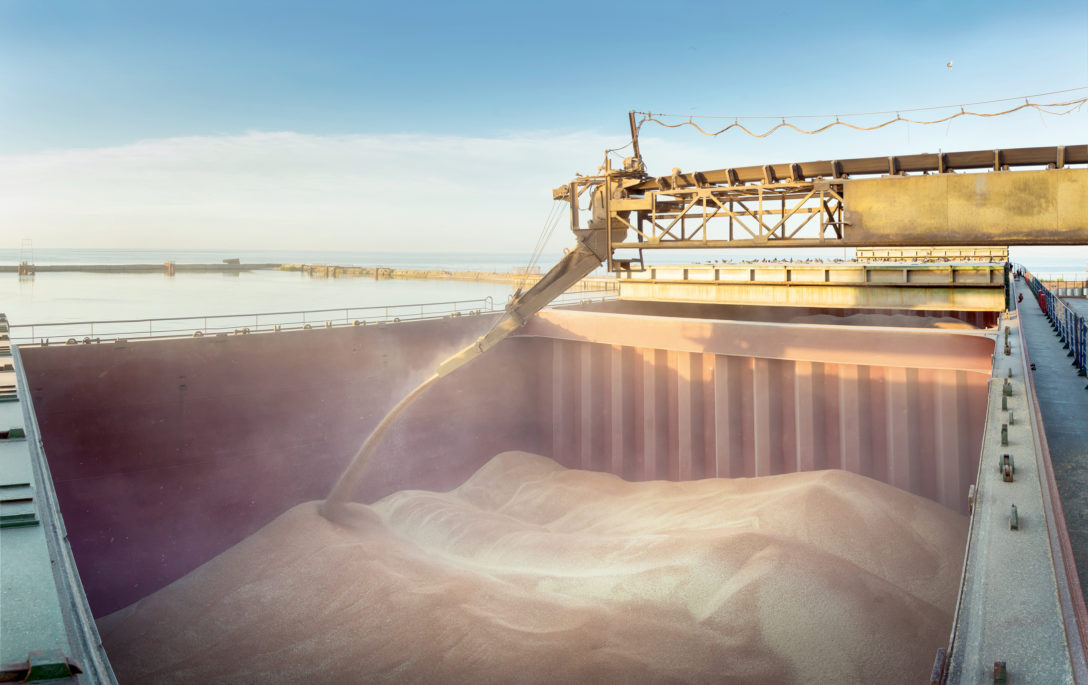 Over the past decade, Romania drew investors who were interested in Black Sea agriculture but wanted to avoid the risks of direct investment into Ukraine or Russia.

Meanwhile, complicated export logistics and the presence of Russian troops in a small sliver of territory claiming autonomy helped keep most away from neighboring Moldova. Despite the agronomic potential of fertile agricultural land that accounts for 75 percent of its area, Moldova has remained isolated and its population of 3.3 million rank among the poorest in Europe.

In the aftermath of Russia’s February invasion of Ukraine, the country’s Danube River port of Giurgiulesti has emerged as an important node in the supply chain helping Ukrainian grain reach global markets. Military action next door has highlighted the strategic vulnerabilities of Moldova’s isolation. European policymakers have responded by designating it as a candidate country for full membership in the 27-nation union alongside Ukraine.

Though a successful EU membership drive would more forcefully shape Moldova’s investment environment over the long-term, war-related changes in trade flows and immediate removal of export tariffs on key crops look set to support Moldova’s agricultural sector in the near-term.

Oliver set out the reasons for this to Agri Investor as follows: “A, because of its geography. B, because of the strip of land that is contested as far as Russia is concerned. C, because of the Ukraine situation; and D, because they’re not in the EU or NATO.” Oliver’s firm is involved in a hazelnut project in Moldova. “For 99.99999 percent of people, they would never even consider it.”

One firm apparently within that risk tolerance is Oaktree Capital Management, which in June 2019 invested in Moldovan grain trader and sunflower oil company Trans-Oil.

In the time since, the company has pursued an expansion into Serbia that has included acquisition of port and storage facilities as well as a business unit shed by a local company in preparation for a sale to Archer Daniels Midland. Although the company acknowledges conflict in Ukraine has had an impact on its operations, Trans-Oil reported, in March 2022, a 43.8 percent compound annual EBITDA growth rate since December 2019, and says it is well-positioned to adjust as conditions evolve.

Oaktree declined to comment and Trans-Oil did not return messages seeking further detail.

From grain processing to port infrastructure

Trans-Oil’s story began with a chance encounter at a fitness center in Fort Wayne, Indiana between local car salesman Jim Kelley and men visiting from Chechnya and Moldova in the late 1990s. A local obituary for Kelley, who died in 2015 and whose family declined to comment, described how he was motivated in part by the resonance of Moldova’s struggles with his family’s experience during the Great Depression to begin a business relationship with one the visiting Moldovan men named Vaja Jhashi, who is a co-founder and former vice-president of Trans-Oil and is now CEO.

The obituary describes that relationship as beginning with Kelley paying for Moldovan farmers’ diesel ahead of payment after harvest, and blossoming into a situation where Trans-Oil began working with the Moldovan government to develop the supply chain for growing and processing sunflowers.

Trans-Oil’s own company history describes how it evolved from an initial focus on trading agricultural commodities from Moldova and surrounding markets, into direct ownership of storage, crushing, farming and port facilities. That focus culminated in what Trans-Oil describes as its 2009 decision to pioneer the construction of Moldova’s first grain loading terminal at Giurgiulesti International Free Port, to be constructed on the Danube River.

“This initiative was viewed not only as necessary to the company from a trading standpoint, but also significantly beneficial to Moldova’s overall economic well-being,” the Trans-Oil website says. “Thanks to the successful completion, this facility serves as the main platform for Moldovan grains and vegetable oils to access the international markets.”

An official from the European Bank for Reconstruction and Development told Agri Investor in an email that the $32 million invested by Trans-Oil to build a sunflower seed processing facility at Giurgiulesti was the second largest contribution to the $107 million invested into the facility by 12 of the port’s 47 residents.

A graduate of EBRD support

Trans-Oil announced in June 2019 that it had welcomed Oaktree as a shareholder after the Los Angeles-headquartered firm’s acquisition of a minority stake in its parent Aragvi Holding International. According to a KPMG-audited financial statement, Oaktree’s Cooperstown SARL vehicle acquired a 12.5 percent stake in Aragvi Holding International in a transaction that saw the International Finance Corporation sell its redeemable preference share to Jhashi for $14 million.

“What they noticed is that the Moldovan market is dominated by this one company,” Wojtek Boniaszczuk told Agri Investor, who is the EBRD head of agribusiness in Eastern and Central Europe, Russia and its former republics. “That company also dominates the exit routes from the country, which offers growth potential,” he said.

Boniaszczuk said the opportunity for Oaktree to invest in Trans-Oil was created when the IFC chose not to redeem shares it was due in relation to subordinate debt it had extended to the company earlier in the decade. The company’s transportation assets were among the factors contributing to its unique position in the Moldovan market, which, he said, is reflected in Oaktree’s investment.

“Not everybody was working with Trans-Oil in Moldova, so there was room for sourcing more, crushing more, perhaps growing more and building on the port infrastructure they had in Giurgiulesti and in Reni,” said Boniaszczuk. Reni is a small city on the Danube in southern Ukraine, which is approximately 10 miles from Giurgiulesti.

“For that market, they are a unique company. They are a dominant player in the market and there are a few others who have been in touch with us to support them in operations”

Boniaszczuk, who has held his role as head of agribusiness at the EBRD since 2007, said the financial institution’s work with Trans-Oil began in the mid-2000s as part of its mission to foster private development in key sectors of underdeveloped economies and included the extension of a $25 million loan in November 2014. Boniaszczuk described the company as having “graduated” from EBRD involvement, in part because of its ability to attract international investors.

“In the end, this whole business is based on availability of working capital to pay farmers for the crop that they grow. In a way, for Trans-Oil, their development was always limited by their access to working capital,” he said. “Moldova is quite an underdeveloped market so lending by larger players into that company always caused issues. Presence in the lender base of entities such as IFC or us was always a comfort to them.”

Though EBRD no longer has any investment with Trans-Oil, and Boniaszczuk has not been in touch with its executives, he said he is aware the business has become more of a regional player.

“For that market, they are a unique company. They are a dominant player in the market and there are a few others who have been in touch with us to support them in operations,” he said. “They [Oaktree] came with external expertise and brought a broad view on which way this company should be growing, which acted as a stimulant for the owner to push it in various directions.”

Oaktree’s interests in Trans-Oil are represented by senior adviser Tommy Jade Jensen, according to a March presentation. Jensen’s LinkedIn profile shows prior to joining Oaktree in 2018 and Trans-Oil’s board the following year, his experience in ag stretched back to 1990 and included a 12-year stint with Bunge, culminating in five years overseeing its operations in the Middle East, Africa and Europe.

To Serbia and beyond

Trans-Oil is involved in wheat, sunflower seeds and corn, among other commodities, and its customer base is distributed predominately throughout the MENA region and Turkey. FitchRatings cited expansion of Trans-Oil’s marketing capacity in Argentina and Germany among factors contributing to its July revision of the company’s outlook from stable to positive (Trans-oil’s March presentation adds that the company has secured origination agreements “with the largest LatAm originators and crop producers”).

Fitch also highlighted Trans-Oil’s December 2021 acquisition of the largest silo complex and port terminal infrastructure in Serbia from Serbian holding company MK Group for €44.25 million, as a contributing factor to its outlook upgrade. That deal included 300 metric tons of grain storage spread across 31 sites in the country, in addition to Danube port facilities in Pancevo and Backa Palanka.

It built on the acquisition of the largest Serbian crushing plant for $68.7 million from Victoria Group (on whose board former EBRD and current Westchester Group executive Peter Bryde served between 2014 and 2017) in a deal that was finalized in June 2021.

And in December 2020, 18 months after Oaktree’s initial 2019 investment into Trans-Oil, Victoria Group sold Victoriaoil, its edible oil subsidiary and owner of the facility, to Oaktree-backed Sun Valley in a deal described as supporting its strategic plan to focus on plant-based proteins and food ingredients through its Sojaprotein platform. Sun Valley is co-owned by Oaktree-managed funds and Trans-Oil CEO Jhashi, according to Schoenherr, a Vienna-headquartered legal firm that worked on the Victoriaoil deal. Schoenherr did not return messages seeking further detail.

Serbia is clearly an important market for Trans-Oil and a key part of its growth plans. The country’s growing significance to commodity traders was further demonstrated by global trading giant ADM in July 2021, when it made its entry into the country through the acquisition of soy ingredients provider Sojaprotein from MK Group for an undisclosed fee.

Exports of vegetable oil and grains, including grain transshipped from Ukraine, have been among the factors driving a more than doubling of volumes moving through Giurgiulesti port this year. In late June, Ukrainian President Volodymyr Zelensky met with his Moldovan counterpart President Maia Sandu and highlighted investment to expand “export transit potential,” among areas of focus in their joint effort to achieve EU membership.

As part of their response to Russia’s “unjustified war of aggression against Ukraine,” European policymakers this summer proposed removing tariffs on exports of seven agricultural products from Moldova that had not yet been liberalized, including plums, apples, cherries and table grapes.

Oaktree’s Trans-Oil investment may have sprung from an expectation that some fort of conflict in Ukraine was likely and bound to give an at least temporary boost to its neighbor’s ag sectors through such EU membership inducements. Such inducements have helped create the opportunities the company is now looking to seize in Serbia, which is another EU candidate nation that could join the union by 2025.

Though some observers have held up the growth that has materialized in Serbia following its conflict-ridden emergence following the fall of the Soviet Union as an optimistic model for thinking about Ukraine’s future, it is clear Oaktree’s Moldova thesis still faces potent risks from the unpredictable course of a conflict most onlookers never expected to materialize so tragically.