Fernando Martins, co-author of the Before You Go and Buy the Farm report, told Agri Investor that characteristics of farm businesses, mainly their small size and infrequent turnover, make it difficult for public markets to value their assets and the investment vehicles tied to them.

The report, released late last year, found that just two of a group of 11 publicly-listed land and agriculture companies traded at or above their accounting book value over five years ending in mid-2016.

The unidentified companies’ asset bases were made up mostly of land and livestock and listed in South America and Singapore, with at least one US-listed company included.

Martins said family farms often provide a less-than-perfect economic calculation of their asset base and the value of their own time, complicating valuations. In addition, land markets are so inactive, giving the small number of transactions within any given year an outsized impact on market sentiment.

“Land is a strange asset class,” he said. “If everyone had to sell all of their land in the same year, in any country, there would not be enough money in the world to buy that land. These valuations are very — I’m not going to say arbitrary — but it’s very subject to the entire economy working smoothly and nobody having any pressure to sell.”

Size is another important factor in explaining why agricultural companies struggle to find traction in public markets, according to Martins.

The average company in Bain’s analysis, which grew from a study commissioned by a private equity firm looking for an exit on a particular investment, was only one fifth the size of the smallest mining companies with which they are likely to be compared in public markets. Companies of that size often have a hard time attracting institutional investors, Martins said.

Martins noted in the report that private equity firms should tailor investments towards agri companies and sectors that appeal to large institutional investors who are able to provide an ultimate exit through a buyout, such as CPPIB and the Ontario Teachers’ Pension Plan.

“Aim for crops and cultures that have good competitive dynamics where suppliers have pricing power and can fully price the costs of all of the resources that go into production, which will be definitely the case in palm oil and citrus and maybe also in almonds,” he said.

In the report, Martins also added that investment officers knowledgeable about agriculture, even among large institutional investors, are often not the same individuals making decisions about equity market allocations. 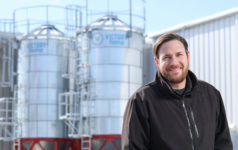