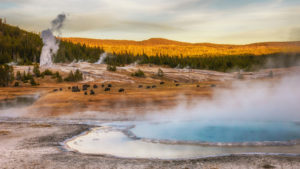 A startup developing proteins derived from a microbe discovered during NASA research into extreme environmental conditions plans to introduce its first consumer products within 18 months, following a recent $80 million Series B.

“It takes at least 10 years in food to be an overnight success; this is not software,” Lila Preston, co-head of growth equity strategy at Generation Investment Management – which co-led the late-March round for Nature’s Fynd with Breakthrough Energy Ventures – told Agri Investor.

“A lot of this is fundamentally [about] getting products to market.”

Microbes able to thrive in those extreme conditions have natural fibrous structures that reduce product formulation costs, Preston explained. The microbes can also draw from a variety of starch feedstocks like sugar to produce a tasteless complete protein that can be made into alternative meat, dairy or other products, she said.

Preston declined to describe in detail what form Nature’s Fynd’s consumer-facing products will take or any plans for potential future partnerships. She did stress that the nature of investors in the round – which also included 1955 Capital, ADM Ventures and Danone Manifesto Ventures, among others – is part of what makes the company scaleable by helping provide “optionality for other commercialization pathways.”

“The people around the table are quite important,” said Preston, whose firm is led by former vice-president Al Gore.

“To have a large strategic who understands supply chain at scale in the form on an ADM [which understands] certainly the whole soy protein market and pea protein market, all of their knowledge base there is incredibly valuable,” she added. “Likewise, Danone, one of the leading thinkers on plant-based solutions at scale with WhiteWave and their commitments to sustainability.”

Though Generation typically invests between $50 million and $150 million for minority positions in later-stage companies, Preston said the firm backed Nature’s Fynd at an earlier stage, in part because it had encountered the company years ago as part of market research into innovative food.

Capital for its investment was drawn from Generation’s Sustainable Solutions Fund III, which closed on $1 billion in May 2019 with commitments from corporate pensions, endowments and foundations, including more than $93 million raised by UBS Global Wealth Management.

Though some such new businesses are likely to eventually be acquired by strategic buyers, she said, others will likely have an opportunity to develop into sustainable standalone companies.

“We’re still in the early innings of this penetration [into alternative proteins] and there will be all sorts of products that will match certain customer demand and customer appetite, foodservice appetite, the ingredient appetite,” said Preston.