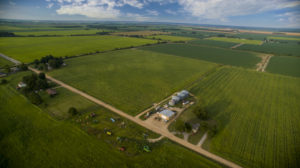 Nuveen is targeting $2.4 billion for its first open-ended farmland fund, according to an NEPC report provided to the Vermont State Retirement System, which committed $100 million to the vehicle last week.

According to the presentation, the Nuveen Global Farmland Fund will target net internal rates of return of between 7 and 9 percent, with an income yield of between 3 and 4 percent. The fund’s performance fee is 10 percent of net operating income over a 4 percent per year hurdle, and its management fees range between 1 and 1.2 percent by size of commitment.

The open-ended vehicle has a semi-annual subscription queue, quarterly capital calls and an initial three-year lock-up period. The fund will aim to make investments averaging $20 million and target fund leverage at 30 percent of gross asset value.

Seeking an even split between row and permanent crop assets, the fund will pursue farmland investments in the US, Australia, New Zealand, Brazil, Poland, Romania and Chile, according to the presentation. It also shows that Nuveen has committed $275 million to the fund, which will be devoted to seeding the portfolio.

“The first four investments will be permanent cropland in California,” wrote NEPC. “The seed investments are existing crops that are high-quality and currently producing income.”

The investment committee of the $4.5 billion Vermont State Retirement System approved a $100 million commitment to the fund at its September 24 meeting.

Vermont State Treasurers Office investment analyst Andy Cook told Agri Investor the pension’s entry into farmland comes after a March reorganization of its portfolio. This created a 2 percent allocation to inflation hedging, where the Nuveen commitment is housed.

Cook said that after the investment committee added the inflation-focused allocation, it considered both infrastructure and farmland before committing to the Nuveen fund. The fact farmland has seen slightly less volatility than infrastructure played a role, said Cook, who added that fund size was also among the investment committee’s key considerations.

“We liked the smaller fund size, frankly, that some of the ag funds are showing,” he said. “A lot of the infrastructure funds are $15 billion funds – massive entities. We wanted to be in something not so cumbersome, something where we are going to get little bit better attention from the manager – be a bigger fish in their pond.”

After deciding to focus on farmland, the pension’s investment committee then limited its search to open-ended funds because it liked the potential liquidity offered by the structure, said Cook.

“The fund does have a three-year lock up, but three is a lot easier to stomach than 15,” he added.

The NEPC report identified other open-ended farmland funds in the market as including offerings from Ceres Farms, Fiera Comox Agriculture, IFC US Farming Realty Trust and UBS AgriVest.