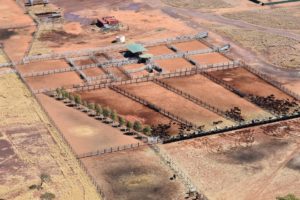 Harvest Road, the cattle business owned and operated by Tattarang, has added the Balfour Downs cattle station in Western Australia’s Pilbara region to its growing portfolio.

The value of the deal was not disclosed but a source familiar with it told Agri Investor that it was approximately A$30 million ($21.3 million; €18.8 million).

The sale included around 12,000 head of cattle, predominantly Brahman with some Droughtmaster cattle, as well as infrastructure including a newly built homestead, staff quarters, sheds and 3,000 head capacity steel cattle yards.

Tattarang, the private investment firm of Andrew and Nicola Forrest, said the property would form an important part of Harvest Road’s beef production supply chain and it was pleased to take it back into Australian ownership.

Tattarang CIO John Hartman said in a statement: “For more than a century, Balfour Downs has been an important part of the development of Australia’s cattle industry. We are committed to preserving this legacy and investing in its future to further enhance this iconic property’s status as some of the most productive pastoral lands in WA.”

In late 2020, Hartman told Agri Investor that the Harvest Road business was experiencing “rapid growth” and was well-positioned for further expansion.

“For all our agriculture exposures, we’re focused on building vertically-integrated supply chains,” he said. “Lots of people talk about it, but in the beef space there are very few examples of it. Both from a production efficiency perspective and a marketing perspective, we’ve achieved strong benefits from vertical integration.

It was also revealed this week that Tattarang has amassed more than 5 percent of shares in Australian Securities Exchange-listed Australian Agricultural Co, one of the country’s largest beef producers.

Tattarang’s stake now stands at 5.31 percent, crossing the 5 percent threshold at which Tattarang had to publicly declare its interest as a substantial shareholder.