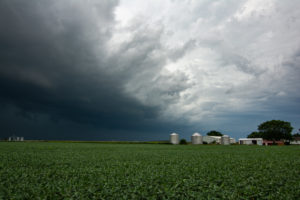 When ANZ released statistics about a potential bumper grain harvest for Australia in August, the news was greeted with some caution.

For the first time in a long time, it wasn’t Australia’s weather conditions that were the cause of anxiety – it was logistics issues created by the pandemic that had stakeholders fretting about the threat posed to their efforts to maximize gains.

Around the same time, similarly good news came out of the US, with the USDA forecasting a bumper corn and soybean harvest for this year. The government department predicted average corn yields of 181.8 bushels per acre and average soybean yields of 53.3 bushels per acre. If these numbers were realized, they would rank among the largest US corn and soybean harvests on record.

USDA’s estimates were based on data gathered as of August 1, but just one month later, the picture has changed markedly. Unlike in Australia, it’s the weather that is causing anxiety in the US.

“You’re still going to get a big crop, there’s no doubt about that,” said Redo. “Soybeans still have a little bit of play because they are planted later, so if more moisture comes through, that will help things.

“But it’s not going to be the mammoth yield that USDA is calling for – I think that’s just off the table right now, that 181.8 [bushels per acre], I just don’t see that happening.”

On a positive note, both Redo and Pipeline Foods’ CJ Eisler, the US-based midstream organic grain-processing company’s vice-president of feed ingredients, believe coronavirus-related logistics disruption will be limited in the US.

“We have not seen any dramatic issues around logistics and execution due to covid-19,” said Eisler. “Maybe [there were] some issues in the trucking sector but rail has functioned as normal, barges and export shipments have functioned as normal. An outbreak in a certain terminal area could certainly shut you down, but knock on wood, we’ve not really come across that.”

As China readies itself to purchase a record 40 million tonnes of soybeans from the US to meet and surpass its pledge under the phase one trade deal, according to Bloomberg, smooth logistics will certainly help maximize the selling opportunity this would create.

US farmers will be hoping weather conditions play out to their advantage for a good end to what has so far been an extraordinary year.