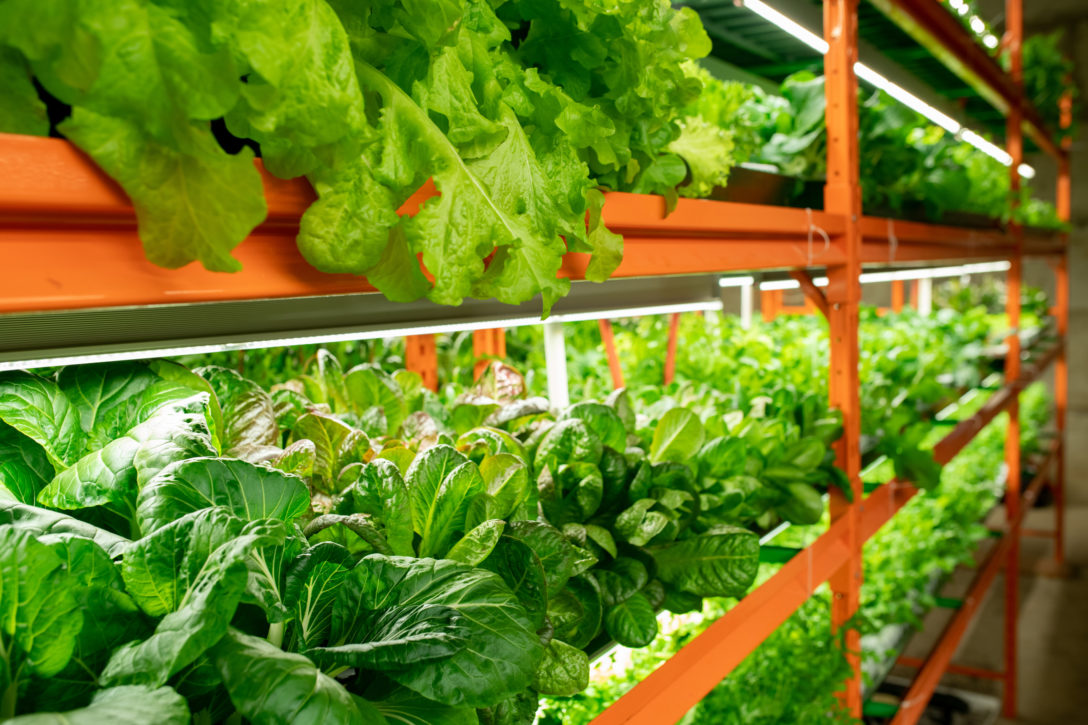 Vertical farming, the practice of growing crops indoors on vertically stacked layers, has received no small amount of interest over the last few years. Vertical farms commonly tout impressive statistics, such as using 95 percent less water and providing crop yields 20 to 30 times that of conventional agriculture.

These claims, among many others, have seen plenty of vertical farming start-ups founded alongside large amounts of industry funding. The level of funding for the industry reached a record high in 2021, with more than $1 billion being raised across the whole industry.

A feature unique to vertical farms is the degree of control they can exert over the growing environment. In a vertical farm, all inputs to the crops are controlled, which involves using soil-free growing methods such as hydroponics and aeroponics, relying solely on LEDs for lighting, and using sensors throughout the farm to inform heating, ventilation, and air conditioning (HVAC) systems on environmental regulation.

This degree of control allows vertical farms to optimize the growing environment for each crop and enable the growing of produce in regions where they could not otherwise grow. This latter point is a significant advantage – vertical farms have the potential to decentralize food production and greatly simplify the supply chain, which would lead to less waste, fresher produce and improved food security.

However, vertical farms also face many challenges. Energy costs are often the largest operational expenditure in vertical farming, owing to the reliance on LEDs and HVAC systems. Additionally, using only LEDs for lighting means certain crops cannot be grown economically. Vertical farms are largely restricted to producing crops with a high proportion of edible biomass, such as lettuce and microgreens. Several staple foods, such as rice and wheat, have a low proportion of edible biomass and so cannot be grown profitably in a vertical farm.

The other primary source of operational expenditure for vertical farms is manual labor. Human intervention is required for many aspects within the farm, ranging from crop monitoring to system maintenance, and the labor requirements only increase with the sizes of the facilities.

This can present operational challenges and requires significant manpower, resulting in higher running costs. In addition, many vertical farms are built in environments not designed for growing crops, such as inside shipping containers, and these can present greater logistical complexities and further increase labor costs.

These factors in turn contribute to the high prices commonly associated with vertically farmed produce, which can be more than four times more expensive than conventionally farmed, non-organic produce.

With crops being grown indoors under controlled environments, a selling point used by multiple vertical farms is that they can grow crops anywhere – even in the heart of a city. This has led to proponents of the industry envisioning ‘smart cities’, where vertical farms in city skyscrapers help feed the urban population.

While this is achievable in principle, the truth is growing crops in the center of a city may be counterproductive. Obtaining and maintaining such a location is expensive and can contribute significantly to the operating expenditure of a vertical farm, while presenting logistical challenges in distributing produce – the ‘last mile’ of food distribution is often the hardest.

Having a farm right next to the consumers may also be less ideal than choosing a location near food distribution centers, as this allows for more efficient delivery of produce. As distribution centers are typically located on the outskirts of cities, the cost of land is also much cheaper.

This is the approach chosen by UK-based Jones Food Company, who chose Scunthorpe as the location for its vertical farm – this is a relatively low-cost location situated near food distribution centers and a network of motorways that could still reach many consumers in a day, even if it isn’t right in the middle of the capital city.

Beyond the location of their facilities, vertical farms must also think carefully about how they present their produce. The primary selling points for vertically farmed produce are the freshness and extended shelf life of the produce, owing to the shorter distribution times that vertical farms can achieve.

Additionally, these crops are locally grown and pesticide-free, which are desirable properties. A 2017 consumer study in the US found the property most valued by consumers when purchasing local food was the freshness.

Vertical farms tend to try to match prices with conventional growers, which leads to serious cost pressures, but this may not be the right approach. Vertically farmed produce is a fundamentally better product and can be priced accordingly. As such, marketing their products as a high-quality, premium alternative, and convincing consumers this is worth paying more for could be a method for vertical farms to achieve success, which follows an approach used by Starbucks.

Consumer perception extends beyond the pricing and quality, however. Today, vertical farming is still a relatively unknown technology that sounds artificial and ‘sciencey’ to consumers, which can lead to customer apprehension. The high production efficiency of vertical farming may also cause it to appear the mass-produced, cheaper sounding option to consumers when compared with organic growing.

Consumers, especially in the EU and US, are notoriously skeptical of food that sounds unnatural, and vertical farming companies should adopt their marketing strategies accordingly. Vertical farms should emphasize the natural, local, and high-quality aspects of their produce and consider the most appropriate retail channels.

There are many compelling arguments against vertical farming, but these do not tell the full story. Although vertical farming is unlikely to revolutionize the global food system, it could find a large consumer base and have a big impact on the fresh food supply chain. However, only through the proper optimization of growing operations can vertical farms reach their true potential.

This article is an extract from the June IDTechEx report Vertical Farming 2022-2032, which evaluates the technological factors and market forces shaping the vertical farming industry over a 10-year horizon