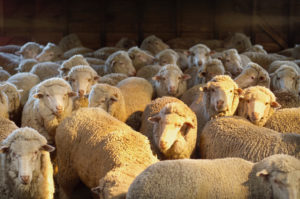 A Meat and Livestock Australia report has highlighted the country’s ongoing strength in livestock exports, but says drought has “certainly affected” prices and supply.

The livestock industry’s marketing and research body found in its State of the Industry Report 2019 that Australia consistently exports 65 percent of its livestock. The country is the world’s leading exporter of sheepmeat and goatmeat, and is the third-largest exporter of beef behind Brazil and India.

The current drought’s impact is being keenly felt by Australia’s livestock sector, with a near-record number of cattle on feed last year, MLA said.

A lack of pasture due to the drought forced many producers to turn off stock in the last 12 months, MLA said, leading to higher production levels in 2018.

Australian beef and sheep exports by volume rose in 2018. Beef exports increased by 11 percent on the previous year to 1.26 million tonnes. Japan was the largest export destination with 28 percent of market share, followed by the United States on 21 percent and South Korea at 15 percent.

The result is that both the national cattle herd and sheep flock are at depleted levels, with the beef herd set to decline by 7.7 percent to 25.2 million head in 2018-19, and the sheep herd is expected to fall by 6.8 percent to 65.8 million head.

The report highlighted the importance of ongoing access to international markets, too, arguing that Australia’s ability to respond to demand in the European Union has been “constrained by historic, highly restrictive low volume quotas.”

It also said that any change to the existing United Kingdom and EU import regimes as a result of Brexit “has the prospect of disrupting and potentially diminishing Australia’s existing access arrangements.”

“The industry is operating in an environment where total world meat consumption continues to increase. Over the last two decades, total global consumption has increased by 64 percent at an average rate of 2 percent per year for sheepmeat and 1 percent for beef.

“Domestically, Australia is one of the world’s largest per capita consumers of beef and sheepmeat. In 2018, we consumed three and five times the global consumption averages for beef and sheepmeat respectively.”