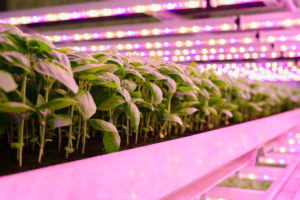 German vertical farming company Infarm has completed a $200 million Series D funding round, which was supported by the Qatar Investment Authority.

Proceeds from the round will go towards expanding its existing global vertical farming operations in Canada, Europe, Japan and the US, as well as supporting new beachheads in Asia-Pacific and the Middle East.

US-based AeroFarms was among four agtech companies – which also included Dubai-based vertical farmer Madar Farms – that collectively received approximately $100 million in investments from the Abu Dhabi Investment Office in April 2020. The package was structured as a cash and non-cash incentives program, which included the construction of an 8,200-square-meter vertical farming research and development facility in the Emirate.

“Our primary goal is to attract them to Abu Dhabi and then to make sure we help them along the entire process, including commercialization and revenue generation,” ADIO director general Tariq Bin Hendi told Agri Investor at the time of the deal.

Berlin-based Infarm uses a combination of large vertical farming facilities that supply produce to retailers, as well as in-store farming units from which consumers can choose from a range of salads and leafy greens.

The company’s range of products includes leafy greens such as basil, baby green pak choi and dill, among others. It plans to add a further 40 crops in 2022 including mushrooms, cherry tomatoes, peas and strawberries.

Infarm has said it plans to grow “the entire fruit and vegetable basket” by 2030, as well as expanding into 20 countries. The company, which was established in 2013, has a presence in 50 cities across 11 countries in Europe, North America and Asia.

“As a responsible, long-term investor, QIA’s purpose is to create value for future generations,” said Qatar Investment Authority chief executive Mansoor bin Ebrahim Al-Mahmoud. “We see vertical farming as a way to enhance food security in every part of the world. We look forward to working with Infarm to develop their first growing centre in Qatar, which will contribute to Qatar’s own food security and economic diversification.”

Land-based aquaculture company Pure Salmon relocated its headquarters to Abu Dhabi in September as part of a similar cash and non-cash incentives program struck by AeroFarms in 2020.