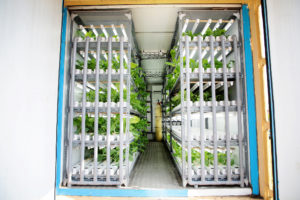 Chief executive Dave Dinesen told Agri Investor that CubicFarms, which trades on the TSX Venture Exchange, was about to launch a prospectus offering of new stock targeting $C8 million when coronavirus-related shutdowns made that plan unfeasible.

Dinesen said CubicFarms was then introduced to Ospraie by Jeff Booth, the chairman of its board who is also chairman of the board of directors for Terramera, a Vancouver-headquartered crop protection company for which Ospraie led a $45 million Series B in September.

“Everybody is now locked down at home and has lots of time to start conversations, so we spent the last half of March and all of April doing due diligence with Ospraie,” Dinesen said.

The terms of Ospraie’s private placement define conditions under which the common shares it will have purchased for $C0.23 per share can be traded. The transaction is scheduled to close May 15 and will leave Ospraie with an 18.7 percent stake in CubicFarms.

The company is still majority insider-owned, and while CubicFarms had planned to use the stock offering to raise growth capital and expand its investor base, Dinesen said the investment from Ospraie can ultimately bring more value.

“High-growth companies like this, we need patient, long-view, synergistic investors and investors that can introduce you and open other doors,” he said. “Ospraie does all of that. Their portfolio companies represent an enormous opportunity for CubicFarms.”

CubicFarms began as a unit within Bevo Farms, a propagation greenhouse company founded by Dutch immigrants to Canada in the 1980s.

It offers growing systems comprised of distinct machines for propagation of seeds to seedlings and growing plants at later stages, together with proprietary irrigation and software systems. The machines are optimized to grow large quantities at commercial scale and built into 40-foot chambers that can move trays up to and away from lights, ensuring uniform conditions for every plant.

“Because we have a machine that brings all of the trays for harvesting and planting to the front of the machine – you can literally stand in that one spot and everything comes to you,” explained Dinesen. “You don’t have to leave space for hallways and access for people to get to the plant, so our yield per cubic meter is much higher than any other system, by a long shot.”

The systems can be used to produce most crops other than root vegetables, including vine crops, flowers, hemp and cannabis, according to Dinesen. A unit within the company is also developing vertical farming technology focused on growing nutritious animal feed.

Whereas large indoor ag operations are unable to optimize their environments to the differing needs of various crops at different stages, Dinesen explained that CubicFarms’ machines allow for such customization. That versatility allows CubicFarms to view the rest of the vertical farming market – alongside conventional farmers looking to diversify or move some production indoors – as potential customers, rather than competitors.

“We can provide the infrastructure,” he said. “If you have a massive indoor farm, our propagation machine is the most efficient way to germinate and propagate, from seed to seedling, enormous quantities in a small amount of space.”

Ospraie founder Dwight Anderson told Agri Investor earlier this year that the firm would look for opportunities for collaboration among companies it has invested in as part of its agricultural venture strategy, within which controlled environment is one of three pillars.