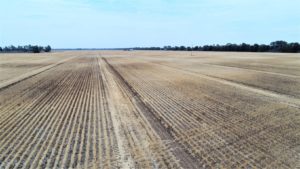 One Tree Agriculture, the Australian farm manager owned by Proterra Investment Partners, has listed two properties for sale in Queensland.

One Tree is selling the 831-hectare Glendaloch and 425-hectare Encliffe dryland cropping properties located near Canaga, around 300km inland from Brisbane. The region has experienced below-average rainfall to date in 2019, although the precise rainfall figures for each property have not been disclosed.

The firm has not stated why it has put the properties on sale. One Tree Agriculture declined to comment. Proterra Investment Partners was contacted for comment but did not respond before publication of this article.

CBRE Agribusiness is conducting the sale via an expression of interest campaign and said in a statement that both properties “feature the characteristics of a highly productive broadacre cropping platform, benefiting [from] operational efficiency via large, regular-shaped fields, fertile soils and optimal climate conditions – including a long-term annual rainfall of circa 627mm.”

At Encliffe, 90 percent of the land is arable and it has been used to produce a range of winter and summer crops including wheat, barley, chickpeas and sorghum.

Glendaloch is 98 percent arable and has been used to produce similar crops. CBRE Agribusiness said that One Tree had focused on improving soil health and fertility under its ownership, as well as undertaking structural improvements including a homestead, workers’ cottage, machinery shed workshop and 752 tonnes of silo storage with an attached grain dryer.

In a statement, CBRE Agribusiness agent Simon Cudmore said: “Each of these properties provides a fantastic opportunity for existing farming businesses seeking to expand their operations or those that might be looking to enter the industry.”

The expression of interest campaign closes on December 17. CBRE was unable to share the expected value of the sale.

In January 2019 One Tree sold an aggregation of three Queensland properties known as Kinbeachie to Daybreak Cropping, a partnership between Warakirri Asset Management and Canada’s Public Sector Pension Investment Board.

It was not disclosed at the time why One Tree and Proterra had decided to sell Kinbeachie, but sources speculated to Agri Investor that the fund may have wanted to take advantage of high property prices before drought conditions worsened.