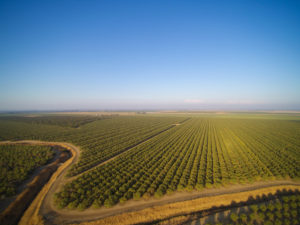 Canada’s Public Sector Pension Investment Board has further increased its exposure to Australian agriculture with the completion of two transactions to acquire 89,075 ML of permanent water rights and approximately 12,000 hectares of almond orchards.

The Canadian pension, which had C$168 billion ($126 billion; €114 billion) of assets under management as of March 2019, acquired the water rights from Singapore-based Olam International for a total consideration of A$490 million ($334 million; €302 million). The water rights transferred are estimated to represent around 0.23 percent of the total water entitlement on issue in Australia.

In a separate transaction, PSP also acquired approximately 12,000 hectares of almond orchards and other related assets that were held in the Adveq Almond Trust II for an undisclosed sum.

Olam Orchards Australia, a subsidiary of Olam International, has agreed a new, tiered revenue sharing arrangement to manage both the orchards and the water rights on behalf of PSP for an initial period of 25 years, with an option to extend for a further 25 years.

The exact nature of the water rights PSP acquired was not disclosed, but Agri Investor understands it is all permanent water entitlements in the southern Murray-Darling Basin. Market sources said that these mainly comprise a mixture of high-security entitlements from the Goulburn and Murray rivers, described by one source as “core entitlements in the southern Murray-Darling Basin”, although this could not be confirmed at time of publication.

Olam International is also known to have held ‘tagged’ licences that allow trading of water from one zone to another without restrictions, although the Victorian state government is trying to restrict this practice. The Weekly Times reported in 2017 that Olam held at least 61,124 ML of water entitlements on the Murray River alone, which would be worth around A$400 million at today’s prices.

The transaction is expected to close in December 2019 subject to approvals. Olam said in a statement that it will receive cash proceeds of A$490 million and that it also expects to book a one-time pre-tax capital gain of approximately A$311 million from the sale of the water rights.

Olam acquired the almond portfolio and its associated water rights from Timbercorp in 2009 for A$288 million. Adveq Almond Trust II subsequently acquired the orchards only, excluding the water rights, from Olam in 2014 for A$211 million, generating a post-tax capital gain for Olam of A$45 million. The Schroder Adveq-led consortium agreed at the time to lease the orchards back to Olam Orchards Australia for 18 years.

The almond portfolio, consisting of eight properties across around 20,000 hectares of total land, was marketed for sale in early 2018 by CBRE Agribusiness.

In a statement, PSP managing director and head of natural resources Marc Drouin said: “Our agreement with Olam Orchards Australia is consistent with our strategy to partner with best-in-class operators who take the long-term view, and to invest in high-quality agricultural assets globally. It is also quite complementary to our existing permanent crop investments around the world and represents a unique avenue to add scale, particularly in Australia.”

PSP has been highly active in Australian agriculture over the last 24 months. Earlier this year it agreed to acquire ASX-listed irrigation farmer Webster for approximately A$724 million, whose assets include more than 3,000 hectares of walnut and almond orchards in New South Wales and Tasmania, and more than 150,000 megalitres of water entitlement in the Murray-Darling Basin.

In addition to announcing the sale to PSP, Olam flagged that it was engaged in several discussions over divesting or restructuring several other assets, some of which may conclude in this financial year, ending December 2019.

The firm last week announced the sale of the real estate assets of its onion and garlic processing facility in Gilroy, California to Chicago-based investment management firm Mesirow Financial for a total consideration of $110.3 million.