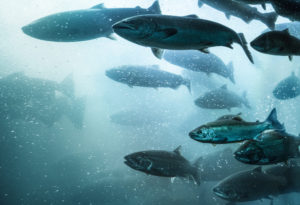 The Abu Dhabi Investment Office has struck a partnership with land-based aquaculture company Pure Salmon, which will see the salmon producer establish its headquarters in the emirate as it pursues its expansion plans.

Pure Salmon Middle East chairman Christophe Lalo declined to provide a figure for how many tonnes of salmon the company currently produces per annum. Lalo did say that the business, established in 2016, “will have processed and sold about 1,000 tonnes of finished salmon products by the end of 2021.”

“We are deploying this global business plan in stages and currently focusing on executing phase one,” said Lalo. “Starting in 2022, we sill start the next phases, which include facilities in Abu Dhabi, China and Brunei. We currently expect to reach full target capacity of 260,000 tonnes per annum by 2030.”

Norway’s Atlantic Sapphire, which was founded in 2010 and has established its largest facility in Florida, is now well-backed by institutional investors and has targeted 220,000 tonnes by 2031.

Lalo added that Abu Dhabi offers the “perfect geostrategic location to manage, service and support all facilities most effectively from one global headquarter.”

One of the ways in which the 8F Asset Management portfolio company will support the RAS ecosystem in Abu Dhabi is through its work with “a local university,” said Lalo, with which Pure Salmon is developing “an aquaculture RAS program to educate and train next generation aquaculture experts in co-operation with the Pure Salmon Academy.”

The agtech arm of the initiative deployed $100 million in April 2020, as it supported four businesses with cash and non-cash incentives. The companies are active in sectors ranging from vertical farming, irrigation and inputs production.