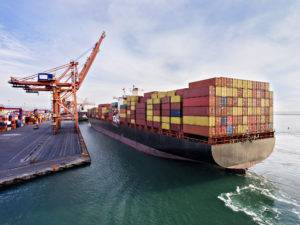 Covid-19 has infiltrated nearly every corner of the globe. In an unprecedented effort to combat and slow the contagion, most countries have severely curtailed travel and shuttered businesses.

As a result, global trade flows and supply chains have been impacted following port disruptions and weakened demand of many agricultural commodities.

The best litmus test for monitoring agricultural flows is China, the world’s largest importer of many commodities. For weeks, China has been in a state of lockdown resulting in severe congestion of ships waiting to unload meat, seafood, grains and oilseeds, and fresh fruit and vegetables.

The latest statistics show a slowdown in the number of coronavirus cases, prompting the Chinese government to ease travel restrictions with some people now returning to work. According to Refinitiv shipping data, the number of vessels waiting to dock at Chinese ports is falling from its recent peak, a sign that the logjam may be easing.

While trade flows into China are expected to improve, imports are likely to remain relatively low. One key commodity indicative of China’s appetite for agricultural imports is soybeans, mainly used to feed the world’s largest pig population.

Refinitiv’s trade flow data indicates February imports from the top four soybean origins of Brazil, the US, Argentina and Uruguay are a paltry 3.9 million tons, down 6 percent from the three-year average for the month of February. Even worse, in March and April, total soybean imports are projected at just 3.8 million and 5.8 million tons, respectively, down 29 percent and 28 percent from the three-year average for those months.

February and March imports from the US are down significantly from 3.9 million tons in January to 1.9 million and 1.8 million tons. As of mid-March, only one soybean-carrying ship is set to sail from the US to China. Much of China’s soybean import slump can be attributed to the decimation of the pig population by African swine fever, but covid-19’s impact cannot be overlooked.

One of the biggest casualties of the virus to date has been palm oil, which is used predominately as a cooking oil and in a variety of foodstuffs. From March 1-15, Malaysia’s palm oil exports were down by 4 percent owing to lower shipments to key destinations such as China, Europe and the United States.

And with an increasingly number of covid-19 cases in Europe and the US, demand is expected to remain suppressed as more countries, cities and states continue to impose widespread shutdowns of restaurants, bars, and movie theaters, thereby further weakening edible oils consumption. Weak demand has been reflected in Malaysia’s month-to-date palm oil exports to Europe and the US, which are down to 137 thousand tons (-2 percent) and 24 thousand tons (-64 percent), respectively, compared to the month prior.

Sugar exports out of major exporters such as Brazil are still strong to typical destinations such as Bangladesh, China, the Middle East and North Africa, but global trade is likely to weaken. Similarly to palm oil, the closure of restaurants and other venues that serve food and drink is expected to lead to reduced consumption, particularly in countries where isolation and lockdown are the most extreme.

Amid the general decline and disruption in global trade, there a few bright spots. For example, Refinitiv trade flow models indicate that wheat imports into Egypt – the world’s largest wheat importer –  during the first eight months of the current marketing year are up 14 percent on the same period last year, and 23 percent above the four-year average. The relatively strong wheat imports, mostly from Russia, are largely driven by population growth outpacing domestic production.

Beef exports out of Australia may also be a bright spot in the coming months. Australia’s key markets of China, Japan, and South Korea are starting to see some normality return to society, with demand ratcheting up. The question in Australia is whether the imminent onset of winter will spread the virus in the country and affect production.

Hope for a rebound in global trade and improved supply chains is potentially on the horizon, due to the rapid decline of new covid-19 cases in China and South Korea.

The question is how severe and extended the impact will be on the new ‘epicenters’ of Europe and North America, as well as how and when the largely untouched southern hemisphere bears the brunt of the virus.