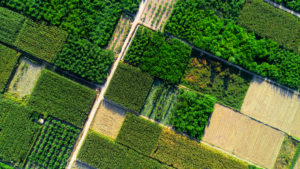 When investors and asset managers think about investing responsibly in agriculture, what are the issues they’re most concerned about?

Agri Investor asked itself this question towards the end of 2019, and in order to arrive at a visual road map of the issues that are front of mind for the industry, we teamed up with illustrator Lee Playle at PEI’s Responsible Investment Forum Europe in London.

Based on suggestions from conference delegates at the event, we have produced an A-Z of some of the most pressing responsible investment themes in ag. Below is a selection from that effort.

Rapid population growth and changes in dietary habits mean global demand for food is expected to grow by up to 70 percent in the coming decades. Before reaching our plates, that food must be produced, processed, stored, packaged, transported, prepared and served. At every stage, food provisioning releases greenhouse gases.

But while agriculture is a major contributor to climate change, the sector itself is also deeply affected by it. Climate change alters the basics of productive ecosystems, such as temperature and rainfall. It impacts natural resources, such as land and water availability, and as such, it affects food security, rural livelihoods and sustainable development at global, regional and local levels.

Water is the most critical resource for sustainable agricultural development worldwide. Approximately 70 percent of global freshwater consumption is used in the agricultural sector. Meanwhile, the Food and Agriculture Organization of the United Nations predicts that agriculture will require 50 percent more water by 2050 to meet the growing food demands of an expanding population.

At the same time, however, water resources are increasingly being diverted from agriculture for domestic and industrial use. Poor water efficiency also means that water scarcity poses a serious and growing risk to food security and environmental sustainability. Less than 65 percent of applied irrigated water is actually used by the crops for growth, according to recent research in Greece. Investment in water management must therefore be a priority for any responsible agri investor.

All of these impacts make improved management even more of a priority. There is an urgent need to produce more crop per drop of water without negative impacts on downstream water quantity or quality.

Women are the backbone of the rural economy, especially in developing countries. More than 1 billion people currently work in agriculture around the world. In emerging markets, 43 percent of those workers are female – and the figure is far higher in some regions. However, these women often lack access to education, financing, land, new farming practices, technologies and innovations that can help them improve crop yields.

It is impossible to overstate the economic, social and environmental importance of forests. They are enormous repositories of food and water; they provide ingredients for countless medicines; they are home to vast swathes of animal and plant species; and they play a crucial role in sequestering carbon, and thus, mitigating global warming.

But the demand to produce ever more food in order to feed a rapidly growing human population has led to an ongoing process of deforestation and land degradation. According to NASA’s Earth Observatory, if current rates of tropical deforestation continue, the world’s rain forests will vanish within 100 years.

Write to the author at Binyamin.a@peimedia.com