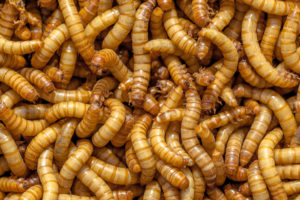 “We are looking at companies that can bring systemic change to the agrifood system. We found a few in the US, but we found quite a lot in Europe,” the Brussels firm’s co-founder Eric Archambeau told Agri Investor.

“Contrary to the current feeling that people think everything is coming from the US, it’s actually not the case,” he said, highlighting his firm’s participation in a $170 million Series C round for Berlin-headquartered vertical farming startup Infarm in September. “We believe these companies are more scalable than others in the same space.”

Paris-headquartered Ynsect said in a statement that Astanor had been joined by its first US investors, adding that it believed the funding round was “the largest amount ever raised by a non-American ‘agtech’ business.’”

Europe’s fertile ground for agtech startups, Archambeau said, can be attributed in part to cultural traditions surrounding agriculture. He believes the American agricultural system has focused on lowering the cost of calories through scale at the expense of unintentionally increasing the cost of nutrients.

“In Europe, although it’s not perfect, people have retained a lot more smaller-scale farming and more cultural attachment to the quality of food and also the joy of food and cooking,” said Archambeau, who spent 14 years as general partner at technology and life science-focused pan-European venture capital firm Wellington Partners before co-founding Astanor in 2018, according to his LinkedIn profile.

“When you want to re-ignite interest from consumers, it is a little bit easier in Europe than it is in the US for now. It will change over time, we hope.”

In May 2019, Astanor co-led an $8 million Series A for Artemis, a company offering indoor farm management software headquartered in Brooklyn. Archambeau said Astanor has completed other investments in the US and plans to keep investing on both sides of the Atlantic.

The firm’s interest in Ynsect, he explained, was as an outgrowth of its focus on the oceans, where a large portion of the global catch is currently used for fishfeed and pet food. Ynsect produces a defatted protein derived from mealworm larvae fed to livestock and pets to replace feed protein through a process that also creates a fertilizer from byproducts.

A supply contract with global fishfeed provider Skretting is among the $105 million in business Ynsect had already secured prior to the recent investment round, which helps demonstrate the company’s potential for a system impact, according to Archambeau.

The $373 million Series C, which comprises a mixture of equity and debt, will support completion of what Ynsect claims will be the world’s largest insect farm, which will be built near Paris. The facility will have a production capacity of 100,000 tons of insect products per year and is scheduled to come online in early 2022.

Archambeau declined to address the investment structures underlying Astanor investments, other than saying it has not drawn from a single vehicle.

“New technologies will allow, quickly, some of these big changes in the way we look at food and make it affordable for a large number of people to eat well; high-quality and still something that has flavor,” said Archambeau. “Flavor is very important, it’s not just about getting more tofu onto your plate.”