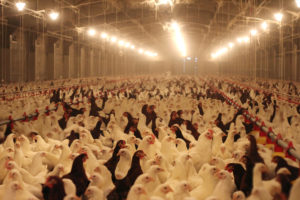 The Coller FAIRR Protein Producer Index, released at the start of the month, left no ambiguity about the lengths that some of the biggest protein-goods-producing companies go to to monitor their greenhouse gas emissions (GGE).

Of the world’s 60 largest publicly-listed companies that produce meat, fish and dairy products, 43 of them – or 71 percent – are ranked as “high risk” by the FAIRR Index. This means they “do not measure all greenhouse gas emissions and do not have meaningful targets to reduce them.”

The 60-strong group of suppliers have a market capitalization of $324 billion and includes the likes of McDonald’s and Nestle suppliers JBS and LDC, which are both ranked as high risk.

The index’s findings are significant because, while investors and fund managers might already be aware of some of these issues, it’s unlikely they will have known about the full scale of the risks highlighted in the report.

This was the case for Robeco senior engagement specialist Peter van der Werf, who confirmed to Agri Investor that through an in-house study launched in 2016, he found out about the practices of some of the listed companies.

“It is helpful to have a more granular view of these companies,” van der Werf said. “We covered 11 [suppliers] and they covered 60. Therefore that breadth of additional companies that we haven’t done our deep dive on is also really helpful.”

Head of research and engagements at the FAIRR Initiative Aarti Ramachandran told Agri Investor that the most striking finding for her was related to deforestation.

“It remains surprising that there is a large number of meat and dairy companies that are not talking about deforestation risk in a meaningful way,” she said. The report found that none of the 50 meat and dairy producers listed in the index have a comprehensive policy to address or mitigate deforestation.

Ramachandran added that “88 percent of Asian companies that are potentially large buyers of Brazilian soy and cattle have no discussion on deforestation – that’s discouraging to see.”

If there is a nugget of encouragement to be taken away from this, it is that the investment community has further robust data at its disposal which it can use to scrutinize its investments.

“We’ll see quite a lot of pressure on those underlying supply chain companies from retailers because they will want to meet their own commitments, and they all want to tell investors what they’re doing,” Lupton said. “What’s interesting is that potential disconnect between what’s happening on the consumer brand side and further down the supply chain.”

As van der Werf notes, suppliers in this space have “been under the radar for quite a while,” but as investor interest in ag increases, ESG scrutiny will rise alongside it. As things stand, “processing 70 billion animals for 7 billion humans every year produces more than 14 percent” of the world’s GGE, as FAIRR founder and Coller Capital chief investment officer Jeremy Coller noted in his foreword for the index.

And with the UN’s IPCC Climate Change and Land Use report, published in August, estimating that the wider global ag industry contributes 21-37 percent of total net GGE, investors and fund managers will have to think long and hard about their next ag commitment.

For a start, they might redouble efforts to ensure their portfolio is free from multi-billion-dollar turnover suppliers that have almost no GGE monitoring processes in place.