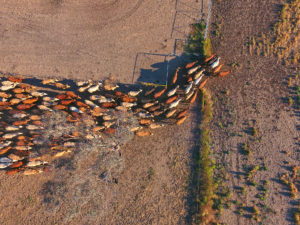 The value of Australian agricultural exports increased for a ninth consecutive year in 2018-19 but the outlook for 2019-20 is “uncertain”, says a new report from Rural Bank.

The result was described as “bittersweet” because the 18 percent growth in cattle exports to A$1.9 billion, the largest growth in any single commodity, was driven by drought-induced destocking that increased production levels but “further eroded the already low national cattle herd.”

With the decline in cropping export values taken into consideration, “it is a very positive result for almost all other commodities to record enough growth to achieve continued growth for Australian agriculture as a whole,” Rural Bank said in the report.

Horticulture continues to be an increasingly important export industry for Australian agriculture, with a A$594 million (27.6 per cent) rise in export value in 2018-19. Each of the major categories within horticulture performed strongly, with the export value of nuts rising by 39.1 percent and fruit increasing by 22.1 percent.

The other growth commodities in 2018-19 were cotton, wine, dairy, sugar and the sheep industry – although the value of wool exports declined by A$163 million and seafood fell by A$61 million.

Export values were supported in 2018-19 by an increasingly weak Australian dollar, Rural Bank said, which is likely to continue to decline this year as the differential between Australian and US interest rates persists, alongside a general decline in business and consumer confidence.

The bank also said the outlook for 2019-20 was “mixed” and that “a tenth consecutive year of growth is uncertain.”

Demand for many Australian commodities and products remains strong, it said, but ongoing uncertainty over the US-China trade war could have unforeseen impacts and supply challenges for cattle, sheep and wool due to reduced flock and herd sizes, will limit production and exportable supplies.

This could be partially offset by an increase in cropping production, although recent warnings from the Australian Bureau of Agricultural and Resource Economics and Sciences over low production in 2019-20, due to ongoing drought conditions, cast doubt over this prospect.

Major Australian wheat processor Manildra Group was forced to import wheat in 2019 for the first time in more than a decade, due to low levels of crop production in the eastern states.

One market source described the outlook as “concerning” to Agri Investor, adding that “tough conditions” were posing challenges for producers in Australia’s eastern states.

Rural Bank found that the top five Australian agricultural export markets by value were China, South Korea, the US, Japan, the Middle East and North Africa, with China alone accounting for 28.4 percent of the industry’s exports.

Victoria produced the highest amount of exports by value of the states and territories, with exports up 0.7 percent to A$13.4 billion. Western Australia saw the biggest year-on-year increase thanks to a bumper cropping year, with export values rising by 25.4 percent to A$8.3 billion.