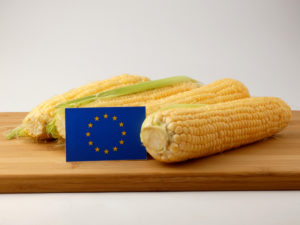 The European Union’s farm-to-fork strategy, launched at the end of May, has got to be seen as a step in the right direction for agriculture.

The initiative is the food supply chain component of the bloc’s Green Deal, which has the wider goal of making the continent carbon neutral by 2050 and decoupling economic growth from resource use.

According to the EU, agriculture is responsible for 10.3 percent of the bloc’s greenhouse gas emissions, with almost 70 percent of this coming from the animal sector.

And lest we forget, global food production-related carbon emissions have been shown, by the UN’s Intergovernmental Panel on Climate Change, to contribute an estimated “21-37 percent of total net emissions…if emissions associated with pre- and post-production activities [are included].”

So, the EU’s aim of reducing chemical pesticide and hazardous pesticide use – both by 50 percent by 2030 – is timely and necessary. Both types of pesticides are known to contribute to water, air and soil pollution. Whether or not this is achievable within that timeframe is a little less clear.

The roadmap for the implementation of state-level policies that will seek to achieve all the goals in the initiative involves the production of country-specific recommendations by the EU Commission, which then have to be debated in member states, with final plans approved by the Commission.

This is likely to take some time – especially with the covid-19 economic fallout taking center stage – and, according to the Sustainable Trade Initiative’s markets director and lead on verified sourcing areas, the sticking point will be how quickly and effectively farmers can be educated.

“You can be ambitious but if you don’t back that up with education of farmers, you won’t get there – overuse of products to increase yield will bring yield down [and it’s] mainly a factor of education,” Willem Klaassens told Agri Investor. “Farming these days is a very technical thing. You need to apply the right amount of things to get to the best yield. If you don’t know how that works then you have difficulty.”

Other standout targets from the farm-to-fork strategy include reducing fertilizer use by 20 percent by 2030 and converting 25 percent of all EU farmland to organic in the same timeframe. On the latter goal, Klaassens is skeptical about achievability in the next 10 years, which, in his view, is “too ambitious and goes too fast. We need to do a lot of research to investigate how we would be able to do this,” he said.

What has to be recognized, however, is that through efforts to achieve these goals, farmers will invariably take steps to store more carbon in the soil by using sustainable farming techniques and reducing the use of products that hinder carbon sequestration.

Through incentives that will be cooked into the common agricultural policy, the strategy also hits on ag’s largely untapped potential to store carbon and become a part of the climate crisis solution, which, according to University of Illinois professor Bruce Sherrick, is one of the traits that ensures the asset class’s long-term prospects.

“The only place you have any chance of storing carbon is in the soil – we have figured that out,” Sherrick told Agri Investor, as he explained why the US-China trade war is a bigger threat to the sector than covid-19.

“The only industry that has a meaningful chance of doing that is agriculture – forestry to a lesser extent,” he said. “Those are positive long-term trends. The consumer’s willingness to pay for attributes as opposed to calories is another huge long-term trend.”

The biggest shortcoming of the EU’s strategy so far, according to Klaassens, is a lack of incentives for trading partners to follow suit and become more sustainable themselves. Such an approach will allow producers to “start seeing sustainability not as a cost, but a business model that gets value where they can make more money,” he said.

While there is a long way to go before we can properly assess the effectiveness of the EU’s strategy, there’s no doubting it is a sorely needed policy development. Let’s hope the bloc can make a success of it.